I saw this T-shirt shop a while back, and I really appreciate the sentiment on this one. 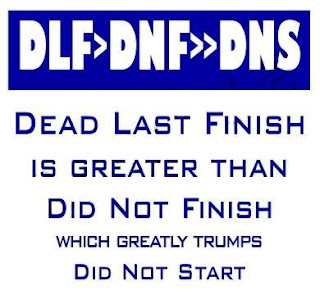 As I mentioned, I have a DNF in the 2002 Tour des Lacs bike ride. I also have a DNF on my first marathon attempt. I was originally training for the Vancouver Marathon in May of 2006. I started getting injuries a few months out, and it was clear I would not be ready. I postponed my attempt for a month and signed up for the North Olympic Discovery Marathon. I had missed quite a bit of my scheduled runs, so I still was not fully trained. My longest run was 14 miles and that ended with me walking in pain (birth of my IT band problems). Anyway, I was going to give it a shot. I didn't want to have another entry fee go to waste, and I didn't know what would happen unless I tried. I also had two friends running the half marathon.

It was a great day for a run - Clear but not too warm. I decided to take a walk break after each mile, hoping to keep the IT issue at bay. I had bought IT straps a couple of weeks earlier and they seemed to help, but for some reason I didn't wear them at the start. I put them on when I started to feel pain around mile 8. I hit the halfway mark at about 2:20, so I wasn't far off my target pace. By mile 14 though, both knees were really hurting and the walk breaks became longer and longer. I stumbled along to mile 18 before calling it quits. I called the wife and she came to pick me up. I probably could have walked it in, but the half marathoners had long since finished and were waiting, and walking wasn't really what I had planned on. I also had a few big biking events coming soon and I didn't want to do any more damage.

I had a quick breakdown in the car with the wife. Finishing was a bit suspect with my injuries, but I was still pretty disappointed. I pulled it together and met the half marathoners at the finish line and celebrated their success. It helped to be around friends and fellow runners. It also helped that I already had the next goal planned.

I have another bike event coming soon, and it is the first in a while where I'm not sure if I will get an official finish. There is a time limit so that adds to the pressure. My bib number is 499 and there are 500 participants. I hope that isn't an omen of my finishing position.
Posted by Sean at Monday, September 17, 2007

Congrats on a great weekend and another ride well done! Great to see Brent as part of the happy crew!

You can do it Baby!!! And if you don't, EVERYONE still thinks the WORLD of you.