When I ran the Marine Corps Marathon in 2006 (my first finish), I wanted to get some things to commemorate the event. I have a few pictures and I bought the DVD of the marathon with some shots of me. I had seen this bottle opener before I went, but didn’t buy it. When I returned, they were all sold out. I kept the link in my favorites in case they made them again. I have checked in every so often, but it never reappeared.

I sent an e-mail to the company asking if they planned to make the opener again for this year’s marathon. A day later I received this response: Hi Sean- Thanks for the inquiry and you must be the luckiest guy alive. I have ONE bottle opener left and we are not producing any more for the expo this year. When I called her to order it, she said they had just moved their offices last week and she found the opener had been sitting on her bookshelf gathering dust.

So, I now have the “People’s Opener”. Maybe not quite as cool as the “Popener”, but pretty cool nonetheless. 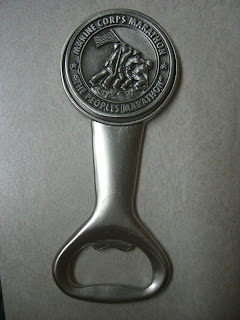