You belong, among the wallflowers

This popped up in the old Facebook memory feed today.

Natural introvert, I have done my best to feel more comfortable with people and crowds by jumping in feet first (on rare occasions to be honest). I have been blessed for my efforts almost every time. I guess the first major plunge was the charity bike ride down the Pacific Coast back in 2006. Didn't know a soul, but ended the two week ride feeling like I had known many of the riders most of my life.

The more recent one is the North Bend Beer Runners. Again, didn't know a soul, but showed up alone, ready to run, less ready to mingle. As per usual, I built it up in my head, it is a totally welcoming group, and I have been rewarded over and over with community and friendship for just showing up that first time. I feel comfortable most of the time, but still almost every Thursday in the time before we start running, and the first fifteen minutes of gathering together afterward, I am the picture of the awkward wallflower. I don't know why this feeling persists, but it does.

If you see me in the corner, know I am doing my best to work my way out of it.

Email ThisBlogThis!Share to TwitterShare to FacebookShare to Pinterest
Labels: a better me, friends, personal, running

Stop talking yourself out of it

"There is a vitality, a life force, an energy, a quickening that is translated through you into action, and because there is only one of you in all of time, this expression is unique. And if you block it, it will never exist through any other medium and it will be lost. The world will not have it. It is not your business to determine how good it is nor how valuable nor how it compares with other expressions. It is your business to keep it yours clearly and directly, to keep the channel open. You do not even have to believe in yourself or your work. You have to keep yourself open and aware to the urges that motivate you. Keep the channel open. No artist is pleased. There is no satisfaction whatever at any time. There is only a queer divine dissatisfaction, a blessed unrest that keeps us marching and makes us more alive than the others."

Email ThisBlogThis!Share to TwitterShare to FacebookShare to Pinterest
Labels: a better me, depression, quotes, writing

The road ahead looks very different

In 2019 I took up triathlon. It was something I had been meaning to do for years. I suppose it seemed somewhat inevitable after running and biking for the past fifteen years. An Ironman had been a bucket list kind of item for years, but procrastination postponed my getting in the pool and tying the sports together. Inevitable or not, it felt shiny and new.

And I loved it. 2019 was the most excited I had been about sport and exercise since I suppose my peak efforts between the fall of 2012 and the summer of 2013 (marathons on two consecutive days, then one-day STP and Ramrod a week apart). In the summer of 2019 I went from Googling triathlon information to doing a sprint distance, an Olympic distance and a half Ironman distance within three months.

I was hooked, and excited for the following year. I ultimately signed up for two Half Ironmans and one full Ironman for 2020. Then of course, 2020 happened. "And then 2020 happened" has been said and written thousands of times, and I have a feeling it will stay in the vernacular for a long time.

Things didn't get cancelled all at once, so there was training and cautious excitement for a few months. Then as it became clear that the show(s) would not go on, I found some other challenges and reasons to stay on the road and in (relative) shape.

After a run on January 5th, I was sick for several days. These days whenever I feel off, I fear the worst, but thankfully the Covid test came back negative. At the same time, Mom had been growing more sick since Thanksgiving. I had been going over to their house four nights a week to help out, and with each visit it was more difficult to have hope. The visits and tax season hours made getting in a run more difficult, but I think the lack of hope spilled over into feelings of "why even bother." I didn't run another step until late March.

When I started running again, everything seemed to hurt. This is pretty typical after a long layoff, but it wasn't just that sort-of-satisfying muscle soreness from getting in a workout. The pain that lingered started with what I thought was a hip flexor issue. I took time off, I stretched, I massaged with a foam roller, and when none of that worked, I tried running through it. Running through it has worked at times in the past, but not this time.

The pain then spread and increased in frequency. My right thigh muscle would quiver and I would occasionally get shocking pain in my right hip and IT band, buckling my leg out from underneath me. My body was failing me, and the hopeless feeling settled in.

After trying all I could think of on my own to improve things, I finally decided to go to the doctor. I was due for a check up anyway, so I could ask about my leg pain while taking care of that. My previous primary care doctor had recently moved out of state, so it took some time and hoop-jumping-through to get a new doc and appointment.

I saw the doctor on Tuesday. He already had my bloodwork results, and other than cholesterol that is a bit high (but not high enough to require medication), nothing was out of order. We chatted a bit about other health items, and I received a general thumbs up for my health as a 54 year old.

We started talking about the leg pain I had been experiencing. At the outset he suggested physical therapy, and honestly getting a referral was another reason for my visit. He then checked my range of motion, find where I would grimace in pain, poked and prodded while asking additional questions. He thought it was unusual that the pain had been going on for this long, so he recommended getting an X-ray. I walked down the hall and took care of it immediately.

To too late cut a long story short, the doctor called an hour or so later and told me that they found that I have moderate to severe arthritis in my right hip. Googling told me that moderate is level 3 and severe is level four. The scale only goes up to four.

I took the news pretty hard. I don't know what this means long term for my mobility, and more specifically my running. As I have written about for years on this blog, running is a big part of my life, a big part of who I am. It of course has made me physically stronger, and I have relished taking on challenges, seeing how the limits I think I have can be pushed through. Running has also done wonders for my mental well being, and I have already been suffering the consequences of its absence these past six months.

Running was also a big part of my future plans. I would complete that Ironman. I would notch that 20th marathon, and then keep going. I would see what all the talk about ultras was about. I would do that relay run, splitting some 200 miles between twelve (or maybe even six) companions. I still want to be that 70 year old guy that shows up at the local 5k every year. I want to see more start lines. Beyond running, I want to continue to backpack and take on the Wonderland Trail someday (if they ever grant me a permit).

After the doctor's call, I left work early and went for a walk. I walked the Kirkland waterfront and rail-to-trail loop that I have used so often on my training runs. As my mind spun, I tried to begin processing what it meant, what I was feeling. To find my feet, as it were. In those first few hours, all I could see was loss, and hope fading once again.

I left the trail to return to the waterfront, randomly turning down a street I had not walked on before. A couple of blocks later, I saw this book in the planting strip by the curb. 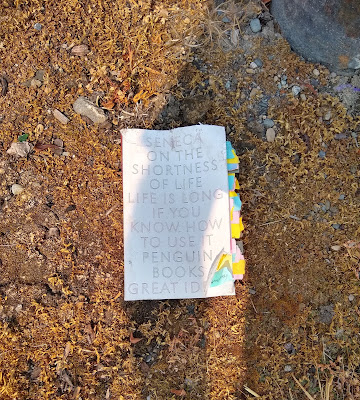 I was fortunate to get an appointment with a physical therapist the next day (there was a last minute cancellation). The PT was not ray of sunshine, "we can conquer anything" enthusiastic about things, but he was encouraging. The PT did his own evaluation of my mobility, walked me through some recommended exercises, and put our next two appointments on the calendar. I tried not to press him for outcomes so soon in the process. He did hint that marathons may be in the past, but he did not write off running entirely.

This is all new. To be frank, I am still working through the freaking out/distraught stage of things, but I am moving toward finding the path forward. It will take a different kind of hard work. My training calendar will be filled with more PT exercises than events, but I will also be squeezing in more non-impact biking and swimming than planned.

Yes, I am happy and fortunate to have generally good health, and there have certainly been larger losses for me this year, but this still hurts, and I am going to sit with it for a bit.