Though I don't have cable, my tv is still on for a number of hours in the evening. Through the magic (science) of apps and the little Roku box, I get to watch a lot of internet content on the big screen. There is of course Netflix and Hulu for movies and shows, but I now spend as much or more time watching YouTube videos. Some of the YouTube content is actually tv (nightly check-ins with Stephen Colbert and Seth Meyers) so this is all starting to loop in on itself and the distinctions are sort of meaningless.

Much of the YouTube stuff is from individual creators though. Some people take me along while hiking the Pacific Crest Trail (Homemade Wanderlust, Whimsical Woman), while others are random people who had an idea that found an audience for a goofy show (My Drunk Kitchen, for example). That is the brilliance of an open internet and net neutrality. People can get their quirky, funny, brilliant, creative ideas out there without going through network executives or slipping Comcast some money so that people are allowed to find you. Call your congressman/woman.

The one YouTube channel that I enjoy the most is The Vlogbrothers. The channel was originally inspired by two brothers (John and Hank) wanting to get to know each other better. Yes, they grew up in the same household, but there was enough of an age gap that they didn't really grow up "together". They also now lived in different parts of the country, so they didn't see each other all that much.

The channel was created with the challenge to send each other a short video on alternate days on whatever topic crossed their mind. Each video opened with "Good morning Hank/John" and ended with "I'll see you on Tuesday, etc." Through daily contact, they wanted to create a better relationship while stretching their creative legs. The channel was originally titled "Brotherhood 2.0".

The channel is now ten years old. They are down to two videos a week, but they have kept building on this relationship while entertaining us along the way. Their videos are at turns funny, educational, deeply personal and nearly always worth the entire time spent watching them. I have spent many an evening falling down the rabbit hole of the internet as one video led to another.

I have two brothers of my own, one just a year younger and the other nine years my senior. I obviously grew up side by side with my younger brother, but I think he would agree that we did not like each other that much, or probably more accurately, we did not at all understand each other. Once grown and out of the house, we discovered /created a new relationship as adults. We have at times actually chosen to live with each other, and we've found some common ground that escaped us as children.

My older brother and I grew up in different eras under the same roof. Nine years is a chasm at those early ages, and he was more an occasional reluctant baby-sitter than a compatriot. However, that age gap enabled an ability to teach and he definitely sparked an interest in working with my hands, particularly in fixing cars while flipping through a Chilton Auto Repair Manual with greasy thumbs.

At fifty, I seem to be pre-senile so I don't recall whose idea it was, but someone started the habit of the brothers meeting for dinner and drinks every month or so. It has been going on for about a year now, and it has been a great thing. We discuss things great and small, but most importantly just spend time together. It has been wonderful getting to know each of them better, in particular my older brother. He is no longer married, and he is a much happier human being. and I feel like I am just getting to really know him. The nine year gap so massive in youth is barely noticeable now.

We are experiencing our own Brotherhood 2.0, and this is one of the things I am very thankful for this year.

After finding her online and in Texas, I first met Izzy in person on May 10th. Baggage claim is not the most warm and welcoming place to meet, but such are the things with internet relationships becoming real. As such, it was and understandably awkward first meeting. It had to be very confusing for her to be shipped to find her new home and person, locked up in a crate in the cargo hold. We wandered around the parking lot to stretch her legs and see if she needed to take care of any business. She was tentative and nervous.

She was much more relaxed in the car. 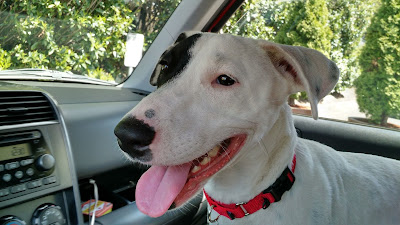 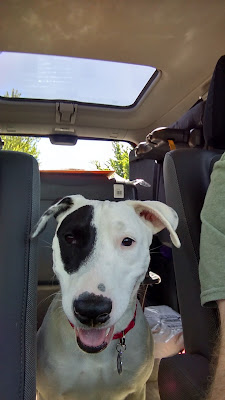 I took the next few days off to help her get settled in and us acquainted. She seemed to be a pretty happy pup, but we did not bond right away. The ladies at the rescue organization warned that she may be more hesitant with men in general. She had been around only women for the last few months, and of course they had no real idea of her history. She may have been abused in the past. I tried to just let her take her time and figure out that I was her person now.

There were adjustments and hiccups in the first few weeks. Wanting to go back inside as soon as we stepped out back. Howling and crying if I left for more than a minute or two. Accidents in the house and at the office, some not seeming so accidental. Over time she has settled in, but she still has separation anxiety. She seems just fine if I leave her in her crate, but if she is loose in the house, she freaks out as soon as I leave.

Fortunately, my office has been very welcoming of Izzy, so she goes to work with me most days. It is now to the point that if I show up without her, they are disappointed. We are both very lucky, and she is rather spoiled in this right. She gets lots of attention and plenty of outdoor time with walks throughout the day. I have tried to give her the best life I can, spending time, taking her places, introducing her to lots of people and dogs.

If I had written this a few months ago while we were still in the honeymoon period, it would have been a thousand cute pictures and stories about how happy I was to have a dog back in my life. Now reality has set in. At risk of tarnishing my reputation as a dog lover and a patient man, this dog drives me freaking crazy.

She is incredibly needy. She is much like a toddler with a short attention span, constantly poking me and demanding attention - but only on her terms. When I am working, she will put her chin on my lap or hop up to put her paws on my leg. When I pet her, she will look off into the distance, barely interested that I am there, but if I stop, she nudges me to continue. If however I offer her to hop up to get attention when I actually have a pause in work, she can't be bothered. Maybe she is actually a cat in dog's clothing.

For all the time we spend together and the worrying over when I am away, I still don't feel much like we have bonded. It feels more like I am the caretaker in a co-dependent relationship than anything else. The running not-so-joke is that someday I hope that someday Izzy loves me half as much as my friend's dog Macy does.

A book was recommended to me called "When Pigs Fly! Training Success With Impossible Dogs" and wouldn't you know that her main breed (Bull Terrier) is the dog on the cover. One of the things it talks about is that these breeds are less interested in checking in with their human for instruction, reassurance or connection. I suppose in my ignorance, I believed that dogs inherently want this connection.The fact that Izzy may never connect with me like other dogs have is one of many lessons I have resisted/started to accept over the past few months.

Others include:
As I fight against getting crusty and impatient, there a definitely places where I have softened. The couch rules were immediately relaxed with this new pup (but the bed remains a human(s)-only space). 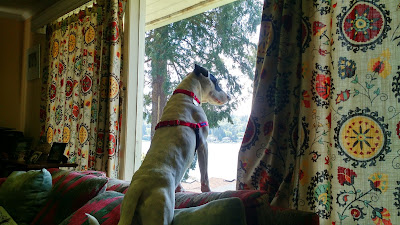 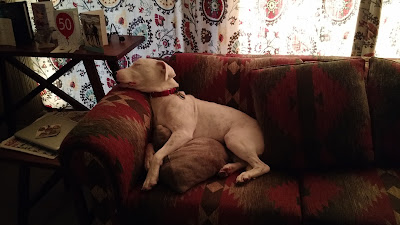 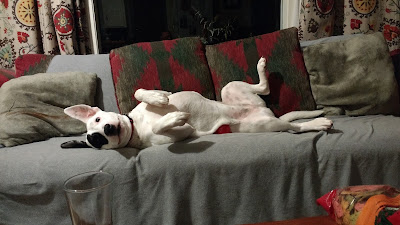 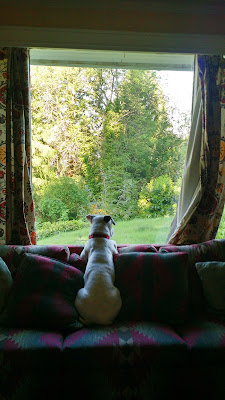