My cousin Liz wrote a beautiful post the other day.  She and her husband Rick (OK, he is technically the cousin) are in Thailand for a couple of years, and Liz is a counselor at an international school there. Now that their own kids are grown, they sold their house and took this two-year left turn on their path because they could.

Rick is headed back stateside for a month to attend to some family matters and Liz wrote her post about the coming separation. It is longer than they have ever been apart, and the foreign residence must certainly add to the disconnected feeling she will experience. She wrote honestly about what she is feeling, and sharing these vulnerable moments is what brings people closer together.

I don't think I have ever felt this sort of separation, and that is my loss. I think I am a little too comfortable being alone. I also don't know that I have ever shared my whole being with someone, at least not at a time when it mattered. I am always sort of disconnected.

I am a pretty classic introvert. I am that nerd that flags passages in books with sticky note flags and carries a tiny notebook in my jacket pocket in case a good moment or phrase crosses my path. I am more comfortable in the company of a few than in a crowd. I have no problem spending the day doing things by myself. I go to restaurants, movies, hikes, etc. flying solo. I seem to run out of social energy if I hang out with others for too long. I can be awkward at times, saying the wrong thing or not saying enough. At parties, I will gravitate toward the dog.

I have been sick the past few days, holed up at home with Nyquil and a Neti Pot. I typically get sick very slowly, recover just as slowly, but the sick doesn't usually hit me all that hard. Basically it is a long shallow curve, but this one has taken me down for four days so far. Living alone of course has its advantages and disadvantages. I am not currently grossing anyone out with my pile of Kleenex or by washing out my sinuses over the kitchen sink. I have never really wanted anyone to "take care" of me when I am sick, but I do find the lack of human interaction creating some cabin fever. Even a brief conversation with a barista would give a boost of energy making the $2 cost of a cup of coffee more palatable.

I guess I am sort of a social introvert now. A man that at times keeps people at arm's length, yet somehow maintains close connections. I have been blessed with having a number of good friends in my life. Much of this can be traced/attributed to my time in restaurants. The work atmosphere not only brings lots of different people together, it seems to encourage closeness as you engage in the daily battle. And of course you are forced to speak to strangers on a regular basis. Through practice and exposure, you are brought out of your shell.

I was at a surprise birthday party a month or so ago for a longtime friend. We have worked together, lived together, been a part of each other's weddings, but more recently we see each other only once a year or so. Another great friend with the same longtime connection would be there along with his wife and son, and I couldn't recall the last time I had seen him. It had obviously been a while since his son was now about five and I recalled him as a toddler.

It was a great evening. All the years faded away as we fell into funny and meaningful conversation. I got to know one of the wives a bit better, and I enjoyed talking to the little boy. When it was time to go, my friend and I were exchanging a hug. I have a reputation for giving a good strong hug, but when I went to pull away, by friend held on and said, "I'm not done yet."In that simple phrase and moment I felt the beauty of deeper connections.  I still struggle with keeping people at arm's length, but I also know I am doing better, and light years from where I used to be.

Earlier, while the adults were chatting away, sharing stories under a tarp cozied up to heat lamps, the little boy came up and asked his mother if there was any paper he could draw on. We weren't at their house so she said she wasn't sure. I reached into my pocket and handed him my pen and little notebook, saying it was sort of small but he was welcome to it. When he returned the notebook later in the evening, it came with a gift. 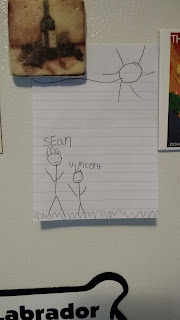 Sometimes it pays to be a little nerdy.