When the alarm went off at 5:30am, I had already been awake for a few minutes. As I swung out of bed, I wondered what it would feel like when my feet hit the floor. How bad would it hurt, and was I really prepared to run another 26.2 miles. I was definitely stiff, and the heels of my feet were pretty sore, but there were no sharp pains. A good start.

After taking care of the pooch and getting myself put together, I hit the road two hours before the start of the marathon. Even though the normal drive time was 40 minutes, two hours almost wasn't enough. Traffic was fine until I got off the freeway, but then it took an hour to move about a mile. Five cars away from making the turn to the parking garage, they closed that street. Then I made it another block before they shut down the next street to let the half marathoners run by. I was stuck in place for 20 minutes as my own start time ticked closer.

After finding parking and walking to the start, I had five minutes to hit the restroom and hop the fence to get in the starting chute. Unfortunately, there wasn't time to find Brett, so I didn't know if he was queued up already, stuck in traffic, or still at home nursing an injury. The gun went off and we started shuffling to the start line. While we were still walking, I spotted a gal who was serving beer at yesterday's finish line. Volunteering for one marathon, running the next. We wished each other luck and headed out.

Once moving, both my right shin and achilles tendon started to hurt. I have had troubles with the tendon off and on all year, but the shin pain was new. Just like yesterday, the plan was just to run at a pace that felt natural, and take the day as it came. Of course with 26 miles already in the tank, I had no idea what I was in for.

It was colder than yesterday, and very foggy. On the drive in, a blanket of fog curled over the 520 floating bridge like a slowly crashing wave. As we ran through downtown, the fog added an extra mystical feel to the white lights in the trees that lined 5th Avenue. The fog would remain most of the day, blocking out all the great views I enjoyed yesterday. It was difficult to even see the water from the bridge or lakeside path.

Minutes later, I caught up to a woman I recognized from yesterday's race. She was doing the full Quadzilla, so this was her fourth marathon in four days. We chatted briefly, wished each other well, and disappeared into the crowd. I had run into her at the Seattle expo the afternoon before, and would see her one more time as I drove past the course after I finished. Weird coincidences in a crowd of thousands of runners.

After leaving downtown, we headed over the I-90 floating bridge. This is a long stretch with little to look at, so I watched the faster runners coming the other way. The weird, random sightings continued as I spotted a friend I hadn't seen in a decade. She was walking the marathon, so I figured I would catch up with her later, but when I was actually looking for her, she passed by unseen.

After making the turn, I saw Brett heading east. I crossed the road and we gave each other a low five. I was glad to see he had made it, and even though we weren't running together, it was encouraging to know he was out there as well. I would see him one more time on the long out and back on the lake road, and he looked even better by mile 10.

Much of the rest of the day was a bit of a blur. After getting off the bridge, the next 11 miles were on the same course we ran twice yesterday. We were running through a bank of fog, with blinders up blocking out the scenery, and my mind fell into a similar sort of tunnel. I tried not to think about much more than putting one foot in front of the other, fell into a rhythm and sort of zoned out.

Halfway around Seward Park, we reached the halfway mark of the race as well. There was a mat and a big clock at the 13.1 mile mark, and it showed that I had just run the first half in just under two hours. I was blown away. It felt like I was doing pretty well, but this was faster than either half of yesterday's race.

Going in, I had no idea what a second marathon in two days would be like. There was no goal other than to do my best. I would have been very happy with a 4:30 finish, and I would be ecstatic if I could match the 4:15 from yesterday. Here I was seven minutes ahead of my dream time pace. If I could keep this time cushion, I could still net a good time with the walking I felt was inevitable. The four hour pace team was just ahead of me, and I just tried to keep them in sight.

At mile 20, the course leaves the lake road and heads uphill. Sharply. The first block is very steep, and I knew I couldn't run it much faster than a walk, so I walked. A left turn onto Madison and the road was still uphill, but I was running again. The pace group would disappear, and then I would reel them in. Up and down for the next three miles, though mostly up, and I lost sight of them by mile 23. I was more than spent, but kept pressing.

A mile from the finish the road headed downhill, but so steeply that it was difficult to navigate. As a final insult, there is climb out of an underpass at mile 26. I ran about a third of the way up before deciding to walk the rest, hoping for a strong finish. Running again, there were only a few steps to go. I was mentally fuzzy, but the thought popped in my head that I don't get as emotional at finish lines as I used to. As soon as I turned the next corner though, it was all over.

The course finishes inside Memorial Stadium, and soon as I entered the finishing chute I began to lose it. When my feet touched the field, I was completely gone. I was overwhelmed by the moment - running around my home city after three years away, the miles of the weekend, the effort I had put into finishing, and a finish time I didn't think possible. I was blinking back tears as I found a little something to sprint to the finish. The clock read just over four hours as I broke the imaginary tape.

I walked through the finish area, unable to catch my breath. I had not only finished my second marathon in two days, but I had somehow cut 15 minutes off of my dream time. 4:00:11 on worn legs. I was just blown away, and I alternated between tears and crazy laughter. Relief and pride. Pushing up against my limits, and then to keep pushing.

After walking around the recovery area, working my way out of delirium, I made my way back to my car. The pain was really setting in now, and the half mile walk felt particularly long. I was meeting friends in Bothell for a belated Thanksgiving Day celebration, and wasn't able to meet up with Brett afterward. Looking at our finish times, we both had surprising days. We both ran very steady races, each of us running the second half within a minute or two of the first half. Brett actually ran the hillier second half a minute faster. That is some great running.

It was an incredible day and weekend. Over 52 miles in a 28 hour period. To not only avoid breaking, but doing better than I could have imagined. Running with a few hundred, and then a few thousand. Running with a friend, and then running alone in the fog, but still seeing familiar faces. What a crazy experience. 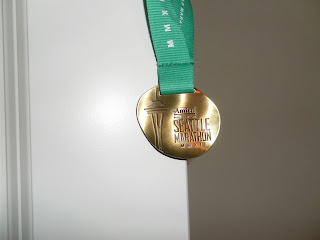