Before I run the Big Sur Marathon tomorrow, I thought I would look back at the last one - The Carlsbad Marathon run in January of 2018

Do you listen to your head, your heart, or your doctor? The answer is almost always your doctor, but...

As I mentioned in previous posts, I didn't take care of myself very well physically in 2017. With few events on the calendar to set a deadline, I couldn't get my butt off of the couch.

Then a gauntlet was thrown.

The other Sean/San Diego Sean/Bizarro Sean sent out an email on October 18th. It was a copy of his verification that he had signed up for the January 14th Carlsbad Marathon with the simple message:

With no real fitness base and less than three months to the marathon I had no business picking up the gauntlet. I could throw out my back just reaching for it. But I had somehow mustered a solid half marathon on a few weeks of training a month earlier, and as I am fond of saying, "I've done stupider things." I signed up on the spot. Now I had a deadline to meet, and it was a great excuse to get down to San Diego to see friends and bask in the sunshine before tax season kept me shut away.

I compressed the first two months of a typical training calendar into one and was soon caught up. The training was harder than it used to be, but at least it was happening. Some hurdles presented themselves - torrential downpours on my 16 miler, having to cut my 18 miler short when I found out on the day of the deadline that I suddenly wasn't going to have health insurance the next month and had to rush home to a computer. You know, the usual.

Then I got sick on Christmas Eve. I rallied for a day or two, but the flu slapped back and would not be ignored. No final 20 miler and no running for the three weeks leading up to the marathon. Most of the ill feelings went away in the last week but there was still crap in my lungs that I couldn't shake.

The Wednesday before the marathon I went to the doctor. Pneumonia was ruled out, but the doctor still said a marathon was not the brightest idea, though I could tell from his eyes he sort of knew I was going to try anyway. I promised both him and a friend of mine I wouldn't do anything stupid. Well nothing really stupid.

Marathon morning had Sean, Marci, their friend BG and me standing on the start line together. I planned to run with Marci and left the headphones at home. I will say that though I was ill-prepared, I was not particularly stressed about it. I did none of the meticulous planning that I used to do before these events. Part of it was the low expectations, part of it was that this would be the third time I had run this marathon, but another larger part was a mindset that I would need to lean on later in the day.

It was a beautiful morning, as most southern California ones are. We set off before sunrise, but stopped for some pictures at mile two to try and capture the gorgeous hues before us. 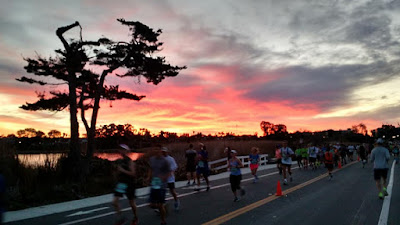 I ran with Marci for the first half of the race. I had run side by side with her at my first marathon finish, and we ran with Sean as a group of three at the Santa Clarita Marathon just a couple of weeks before I moved back to Seattle. She practices the run/walk strategy and I thought that might be the best plan to get me to the finish that day.

We ran and chatted as the miles ticked by, but by the twelve mile mark it was clear that I was not going to be able to keep up. You never want to leave someone behind, but we have run enough of these things to know the difference between someone who doesn't have it that day vs. just going through a rough patch that could clear with some encouragement. I waived her on and set about to run my own race for the next fourteen miles. It was the best decision for both of us as Marci would go on to set her personal best that day.

My IT bands were tightening badly, and my lungs were still a bit junked up. I started the infamous "run til it hurts too much and then walk for a bit" strategy. Along the way I met two women who were working medical support and they sprayed my legs down with BioFreeze. I wanted to give them each a big sweaty hug for this miracle potion. Back to run/shuffling.

My pace was obviously slower but not terrible. On a normal day I probably would have just gone to that place of suffered effort to get through to the end, but as I mentioned earlier I had made a promise to not to do anything (too) stupid. So at mile twenty I made a decision.

I would walk. The last six miles.

And I was surprisingly OK with it.

I had listened to a podcast by Two Gomers Run For Their Lives a few days earlier. In it they talk about their One Words for the new year. Sort of a crystallization of their goals in bit they stole from Oprah. Steven's word was "Love". Though he felt a bit cringy about selecting such a broad and overused word, he went on to talk about how he wanted to refocus on why he runs and does the other things in his life. To find the positive reasons instead of acting out of duty or guilt. I settled into the walk and thought about all the great things running has brought me, not the least of which are the friends I had set out with on this adventure. It didn't hurt that it was a sunny day, and I was walking near the ocean with palm trees dotting the horizon.

But it was still a long way to walk.

I cheered on other runners as a walked with a smile on my soul. I met the medic ladies once again and took another BioFreeze bath. After walking for some time, I thought about picking it back up to a run, but quickly set aside that thought and stayed in my previous decision. I took my time and I took some pictures. 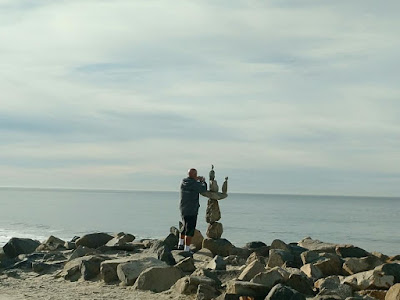 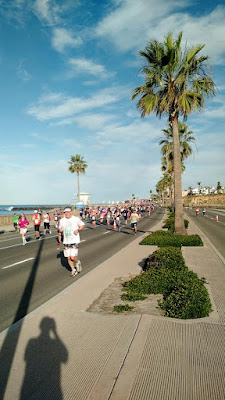 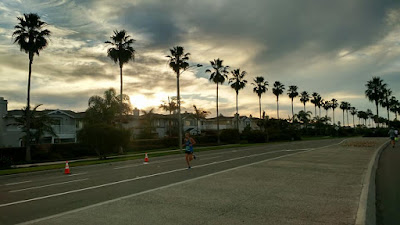 The time goals started falling away. 4:30 was long gone and soon after that 4:45. Then I started doing more math in my head. If I kept my current walking pace, I might exceed 5:15 and it would be my slowest marathon ever, slower than that first finish in D.C. eleven years earlier. I did a little power-walking.

I still remember a year later walking around a corner about a mile from the finish and hearing music blaring up ahead. A Bon Jovi song I can't remember was ending and the song "Call Me Maybe" started up. I don't know why, but that fluffy bouncy song blasted at eleven put a goofy smile on my face.

Soon the finish line was just one more corner away. Runners run-shuffled past me to cross their first, fourteenth or fortieth finish line. Each one is something special and it gives you a boost to allow you to find one last bit of energy to speed up. I clapped as each one passed. I had come this far walking and resisted the urge to break into a final run myself. It took me long enough to get down the finishing chute that the announcer called my name twice, which made me smile one more time.

I crossed in 5:12:36, just sneaking in under my D.C. time of  5:14:46. It was strange to finish so relaxed, still in pain but strangely refreshed. I found my friends in the finish area. Sean had had a rough day himself, but more typically pushed through it and was still trying to recover. I found out that not only Marci had run her best marathon, but BG had as well. I had been looking for him but did not see him go by. We later figured out it must have been about a mile from the finish as he recalled hearing "Call Me Maybe" at full volume as well. 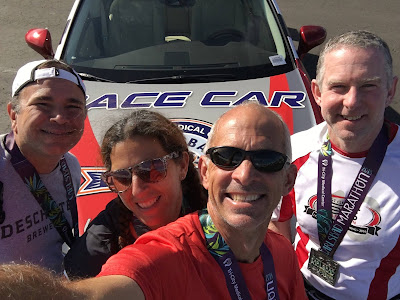 If the marathon had been a local one, without a trip to see friends built around it, I don't know if I would have run. The way the day turned out, initially disappointing and then strangely rewarding, I am so glad I decided to run. It is an experience I will never forget, and I hope to find that peaceful mindset the next time I am struggling. 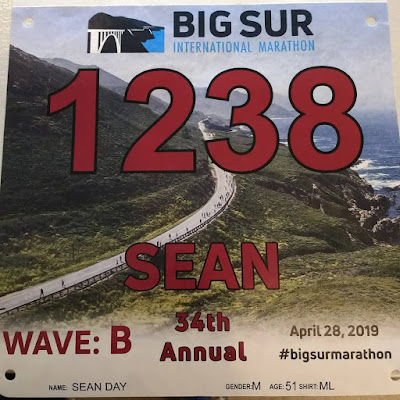