How to wake up early on the weekends and clear that morning brain fog quickly:

Step one: Have a painful calf cramp that has you pleading. "No, No No," as you frantically massage the knotted muscle.

Step two: After the cramping subsides, lie still, willing your muscles to relax.

Step three: Let things great and small, important and trivial rush through your head, ensuring that even if your muscles relax, your brain won't. Look at the clock, sigh,

Step four: Get up. Start the coffee.

Step five: Optional, but recommended, drink your coffee while staring at the horizon, letting the trivial thoughts fade into the background.

A new year. A fresh calendar page. A clean slate.

So many of us wait for January 1st to resolve to follow new goals and leave certain habits behind. The date is rather arbitrary in the grand scheme of things, but it has a nice tidiness to it. The fact that it follows so closely after the Holiday/Christmas season, changing habits is especially welcome as we detox after too much food and libation. You are also inspired by the time spent with the people you love most. We commit to "start to do things differently," but are happy to postpone it a week for that nice annual starting point. I mean 1/1 is even numerically pleasing as a place to start. There was even a possibility of snow this morning, which would have reinforced the clean new world feeling, but alas my neighborhood received just a dusting.

So here I sit happily falling into this tradition or trap with a laundry list of things I would like to change. It is of course a poor strategy to try and make multiple changes at once, and New Year's resolutions already have a pretty poor reputation for longevity. Check into any gym and it will look very different at the end of February than it did at the New Year. In 2011 I did the monthly resolution experiment, and it was a nice exercise to focus on one thing each month. I was not so clever as to prepare another list for 2017, and quite frankly I haven't even begun by writing any down for 2017.

But there is definitely a loose list floating around in my head. Top of that list is to be more present, focused on what is in front of me rather than living with distraction. Step one would probably be to write these things out to get them out of my head and in front of my eyes, but I chose to start here first as this seems to be the worst casualty of inertia.

I was recently talking to a couple of our clients at work. They have been promising me some information for most of the year, and we were still talking about it on December 29th. One of them said, "I am really going to focus on getting this to you, but we have failed enough times that I won't bother lying to you about getting it to you tomorrow." Similarly, I won't bother here with lying to you that I will be writing on any regular schedule, but I will try my best to get back in the habit. It does my mind some good.

I recently finished reading a book called On Trails: An Exploration

by Robert Moor. It is about how trails develop, both through human and animal activity, and their impact on the world and ourselves. It was an interesting read. Sometimes when I am reading a book and want to remember a good passage or turn of phrase, I will flag it with a little sticky note. This many tags is generally a sign of a good book. 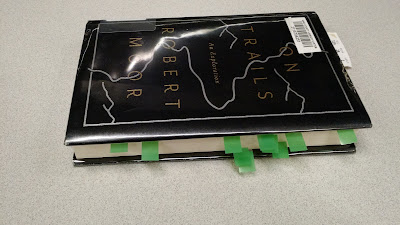 The opening quote on the preface page of the book is:


"The path is made in the walking of it" ~ Zhuangzi

I don't know what my path will be in 2017, but I have some ideas of where I would like it to lead. At this point, though, I won't bother mapping it out. I will make the path by walking it.