Immediately after the Seafair sprint triathlon, I signed up to do the Olympic distance four weeks later. The Olympic distance is roughly twice the distance of the sprint with a 1.5k swim, 40k bike ride and 10k run (roughly .9 mile swim, 25 mile bike and a 6.2 mile run). Though I did pretty well at Seafair, I wasn't overly confident I could double the distance in less than a month.

In the weeks in between races I began to feel a bit better swimming in open water. I started swimming at Lake Sammamish State Park where the swim area is wide enough to get some long laps just swimming along the ropes. My new friend Ann who has done many triathlons, including now 10 Ironmans, joined me one Saturday. She has been a bit of a Godsend, with endless encouragement and advice. The day she joined me we swam roughly the Olympic distance and then hopped on our bikes to ride around the lake we just swam in. I almost always train alone, so having a friend along for the ride was a treat.

A week before the race I went on my (nearly) annual backpacking trip. We have done it each year since I moved back, but couldn't get our schedules to line up last year. I was really looking forward to the trip, but of course it meant one less week to train. It was a great trip, escaping to the woods to disconnect and reconnect, and of course there was a bit of exercise along the way. Unfortunately, I also came home with a strained calf, so that was not the best thing leading into the race.

It was another early morning on race day to get to the start. Parking was available near the start, but they suggested it would fill up by 6:15. I arrived around 6:00 and there was already a long backup to get in, so I moved onto one of the offsite parking areas at the local fire station. I walked my bike to the start, slowly warming up sleepy muscles.

Along with avoiding last minute stress, getting to the start line early allows you to have a better pick of where you get to set up your station. I picked a good spot and wandered around a bit to check out the area. I met Kathleen who had run the volunteer spot at Ramrod a few weeks earlier. She was volunteering here as well and helped me get checked in. She would later help feed us by manning the food station at the finish. Volunteers really do make these events possible. 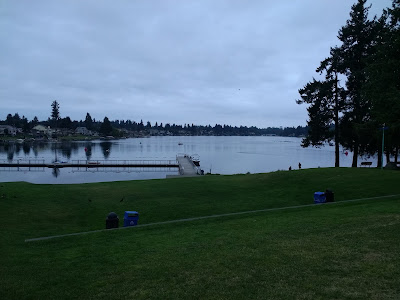 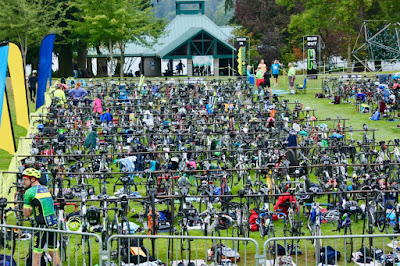 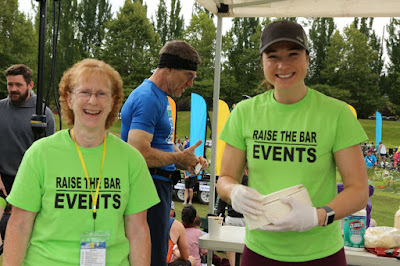 Another familiar face was Angie. I had found out a few days earlier that she was participating in the same race. We ran into each other as I was wading into the lake for the start and exchanged an awkward wave.

Speaking of waves, unlike Seafair where there were multiple start waves broken up by age and gender, the Lake Meridian Tri only had two waves per event, one for the men and one for the women. It was a much more crowded start, so as soon as the gun went off there was lots of bumping into each other and jostling for space.

Watching Ironman events on TV, and hearing all the stories of people thrashing against each other at the swim start, I had always had this trepidation about the swim. Many describe it as being in a washing machine as soon as the gun goes off. This wasn't anything like that, but where at Seafair the swimmers spread out eventually, there always seemed to be several people around me throughout the race.

I did a bit better job of sighting the buoys we were to swim around, so didn't add too much distance to the swim this time. I also didn't have any panicky feelings, though I did fall in and out of rhythm on a regular basis while pulling up to avoid running (swimming) into other people. The women started only three minutes after the men, so it didn't take too long for the speedier ladies to catch up to me. As I exited the water, I thought that I saw Angie just in front of me, but it turns out it is easy to mistake people hidden behind wetsuits and swim caps. I did a speed walk to the transition area and swapped out gear and headed out for the bike.

My stomach was again feeling pretty poor for the first bit of the ride, so it was difficult to get any fluids much less any food down. I tried to spin up to speed slowly and wait for my body to come back online. The first several miles were a bit of passing and being passed until we all sort of settled into our paces.

The bike course is basically a set of three out and backs so once you made the first right turn there were faster bikers already coming back from the first leg. Again at Seafair there were so many start waves that there were going to be people well ahead of you regardless of your speed, but here it was clear that the people headed the other way were just on another level of fitness and talent. I did not find this discouraging, and just enjoyed having something to look at while pedaling. 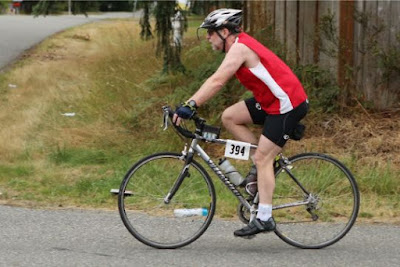 Having felt like I pushed it a little too hard on the bike at Seafair, I tried to ease off a bit to save something for the run. Even so, my average speed was similar to last time, so pacing is something I still need to work on.

About sixteen miles into the ride I stood up out of the seat to take a break and stretch my back and legs. A few seconds after returning to pedaling, my right calf seized, knotting with a painful cramp. I actually cried out in pain and veered over to the shoulder of the road. My right foot is the one I always clip out of the pedal first, and with it locked up in a cramp I almost didn't get it out in time. The revenge of backpacking.

Once safely stopped, I hung my head over the handlebars and tried to will the muscle to relax. After a minute or two it did, so I started to slowly pedal again, pressing on without pressing too hard. If I am not going to learn to pace myself, my body is going to painfully intervene until I do.

I finished the bike without further incident and headed back into transition. I changed shoes, grabbed the belt that holds my race bib and headed out over the grassy hill to find the run course. Again it felt like I was shuffling, but I did feel better starting out than at Seafair. I had a bit over six miles to go, so I was happy to slowly ramp up. The run course was mostly on a paved park path with some small ups and downs in terrain. There was one longer downhill near the start, and I told myself that I would walk it on the way back in. There was a guy dressed in a Tyrannosaurus costume running up and down the hill cheering people on. It is such a wonderful thing to have people dedicate their mornings, dressed up in a silly costume, just to encourage complete strangers. Getting to experience these random bright spots of humanity are one of the many reasons I do these events.

The run course was a completely out and back course, so you ran about three miles in one direction, turned around, and ran the three miles back on the same path. Not the best set up for variety of scenery, but again you were running past other people on your way out and in. There were smiles, some vacant stares, but lots of nod and waves of acknowledgement and encouragement. When I was headed back I saw Angie coming the other way, and we gave each other a much less awkward greeting and some atta boys/atta girls.

When I reached that hill, I walked just as I planned. The Tyrannosaurus guy was still there and cheered me on to get running again, but I smiled and told him this was my promise to myself. It was less than a mile to the finish, so I tried to pick up the pace a bit when I was back running again. I don't know if I went any faster, but the increased swing of my arms made me feel like I was digging in.

Around the grassy hill the finish line appeared. My neighbor had talked about possibly coming down to see me at the finish, and asked me what time I thought I might run. Having only just done the one tri and never this distance, it was a bit of a wild ass guess, but I thought somewhere between three hours and three hours twenty. When the finish line came in sight, I saw the clock and one more smile crossed my face. I finished in 2:52:49. 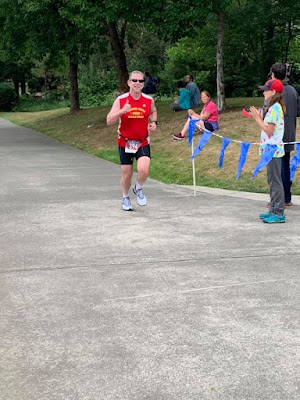 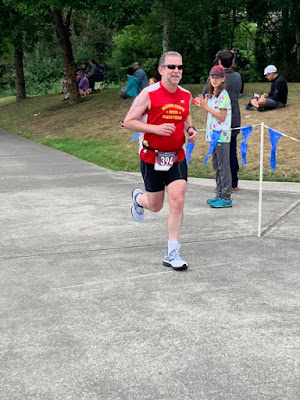 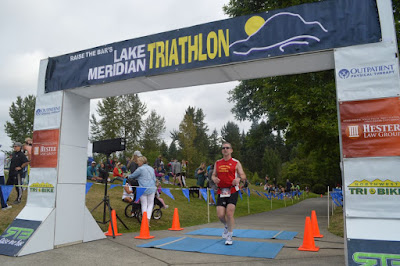 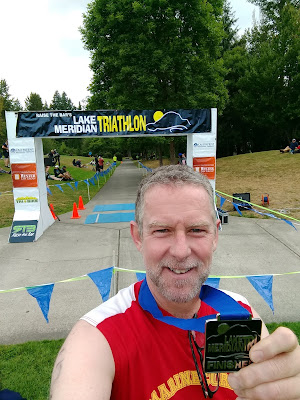 I am really happy with how the day went. The swim was a much better experience than last time, other than the calf cramp the bike went well over a more hilly course, and I didn't blow up on the run, running a pace I would be happy with without all the swimming and biking preceding it. All in all a great day.

But it would get better... Details in the next post