After crossing the finish line I wandered over to Ann to say hello and briefly debrief on the race. I hung out for a few minutes until Angie crossed the finish line and then made my exit so she could have the finish to herself. Smile on my face, I wandered through the crowd making my way back to my station to get rid of some things and grab my phone for some pictures.

After gathering my breath and letting the day sink in, I found my way over to where the volunteers were dishing out baked potatoes. It didn't sound all that tempting, but I knew I needed to eat. I only ended up finishing about half of it before tossing it out. My stomach is always a bit messed up after any long event. Even though I never seem to take in enough calories while on the road, I never feel much like eating when I finish.

I found some open grass among the crowd and listened as the event organizers went through the awards and raffles. There were actually three events/distances on the day, a Sprint, Super Sprint and Olympic triathlon. They also broke up the age groups in five year increments so the award ceremonies went on for a long time. Every so often they would raffle off some prizes to keep people around and interested.


Many people had left by this point, so when they called out a bib number and no one responded, they would toss that number aside and draw another. They mentioned that even if you won one of the smaller things, your name would still go back into the hat for the grand prize. Part way through Ann sent me a text and then waved me over to join her and a couple of her athletes/trainees. We swapped stories about how the day went, enjoying the day again in the retelling.

As they made their way through the various events and age categories, I kept looking at the clock. I had left the house sometime around 4:30 or 5:00 in the morning and it was already going to be eight plus hours that Izzy would be cooped up in her crate. I kept debating ducking out, but I was enjoying the sorta-after-party, and hey you never know.

When they finally got to the Olympic distance, and then to my age group I was surprised to find that I had finished fifth. At that point I didn't know how many were actually in my age group, but I was hoping it was at least six. I later found out it was twelve, so not too shabby for my second tri and first time at the distance.

To speed things up a bit, they announced both the men and women in each age group and had them go up to the stage together to get their prize. Angie had placed third in her age group, and the way they had the stage set up we were standing side by side to get our pint glasses. Weird coincidence. 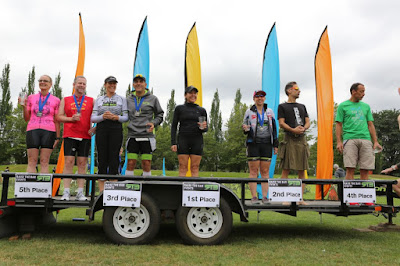 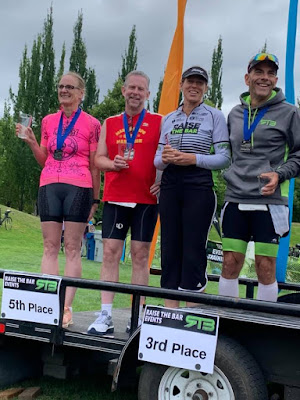 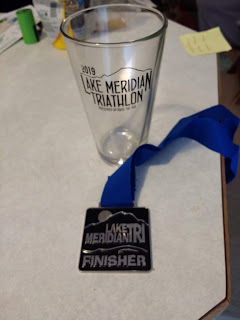 I made my way back up the hill to Ann and her group and shared my amazement that I had placed. It was not a couple of minutes later than one of Ann's friend's name was called. as she placed in her age division as well. Smiles all around.

Once the awards were finished it was time for the grand drawing. They added back the previous winners, but left all the non-responses sitting on the grass where they had been tossed aside. To add a bit of suspense, the announcer called out the winning bib number one digit at a time. When he started with a 2, I knew I was out. He called out 2, 1, 5...  No response. The person who had won had already left, so that number floated down to the grassy dead pile.

They dug into the hat again and slowly read off the next number - 3 (me)...9 (also me!)...4 (holy shit, that's me!!). I tossed up my phone in surprise and leapt up raising my hands in the air to make sure they saw me before drawing another number. I jogged down to the front as people clapped and probably started gathering up their things. I showed them my bib to verify I had not misheard, and they waved me up on to the make-shift stage. There waiting for me was Brad from the local bike shop. Also waiting for me was a very nice Cannondale road bike. 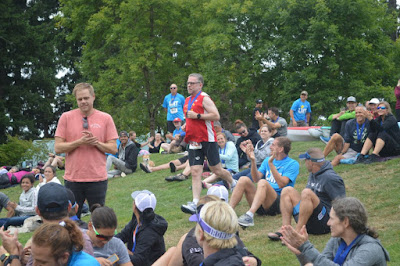 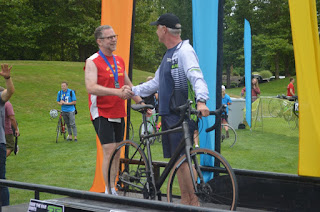 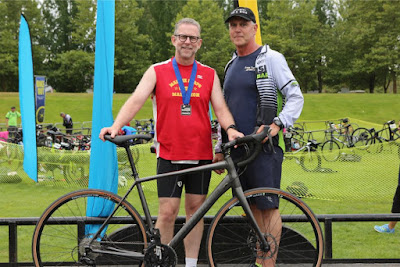 While they were snapping some photos, Brad and I chatted. I noted that the bike was a size too large for me, but obviously this was sort of a placeholder. After chatting for a bit longer, he asked something along the lines of "do you even need a bike?" I guess he has given away a bike at several previous events, and sometimes the winner already has several bikes. Not this guy.

I mentioned that I already had a road bike that although it wasn't as nice as this one, I didn't feel that it was exactly holding me back. I mentioned that I was just getting into triathlons, but I was hoping to get a triathlon specific bike at some point. He said he couldn't provide a tri bike at the price point of this one, but I could apply the credit to get me partway there.

I hadn't planned on getting a tri bike until at least next year, and even then I would be likely shopping for a used bike. But damn, sometimes you get lucky.

It was a doubly, triply successful day. I drove home still a bit worried about Izzy, but it turns out she was just fine. When I let her out she just sat down on the lawn and stared out at the lake, very zen-like and apparently not needing to pee. Glad I stayed for the drawing.

Next, bike shopping. This tri thing is starting to get serious.