That time I could've died young

There are times in our lives where you dodge the worst, and wonder if there isn't someone out there looking out for you. If you had left your house a moment earlier or later, you would have been in that car crash you narrowly missed. If you hadn't caught your balance at the last minute, you could have pitched off the roof. If someone hadn't grabbed your collar, you would have walked mindlessly into traffic.

One of those moments was when I was a kid, flying a kite. I don't remember why I was flying a kite on that day. I don't have any solid memories of flying one before this day, or any day after it. Anyway, some random afternoon I was in my neighborhood having some stereotypical Leave it to Beaver childhood fun.

It surprises me to remember that I ever got that kite off the ground. My limited memory of kite flying is that it is a massive pain in the butt to get the thing airborne, and I can't imagine how I did it alone. Somehow I did, and it took me down the street and up into a nearby cul-de-sac. And then into the power lines.

Rather than walk away from a ten dollar toy, or more likely not wanting to leave trash behind, I tried to figure out how to get it down. Then I remembered that we had a tree pruner in the garage. If you don't know what a tree pruner is, it is a sevenish foot pole with a long cord attached to a set of pruners to cut branches that are far out of reach. If the branches are are too thick for the pruner, there is a large saw blade on the end. 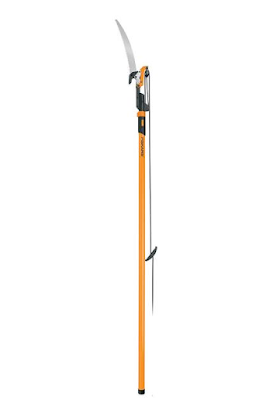 When I went to the Home Depot website to swipe this picture, I found out the poles are made of fiberglass now. Back then, the pole was metal. People are smarter now (sometimes).

I first grabbed a ladder and then went back for the tree pruner. I remember trying to manage this heavy and unwieldy tool, ready to cut the kite string away from the power lines. I assumed the power lines were wrapped in some form of insulation. It seemed ridiculous that they wouldn't be, and of course I had seen birds on the lines all my life. I did not understand electricity, or what grounding meant. Truth be told, I still don't totally understand it.

Anyway, there I was, ready to extend this metal pole to touch the live wire. Then someone stopped me. A neighbor not quite ran out of his house, but did a solid power walk to stop me. He didn't yell, didn't make me feel stupid, didn't grab me by the shoulders and shake into me how dangerous and possibly deadly this was. In what seemed a perfect dad-like delivery he said something like, "looks like you got your kite stuck up there."

He also didn't tell me to just go home and call the kite a loss. He had me put down the tree pruner and we walked to his garage. He grabbed a fishing pole, some duct tape, and a steak knife. He duct taped the steak knife to the end of the fishing pole, and then taped the bamboo fishing pole to the tree pruner. Back to the ladder, he rather deftly cut away the kite string from the power line with this now fifteen foot contraption, and sent me away. If it was Leave it to Beaver, he would have tousled my hair.

I didn't understand the bullet I had dodged until many years later when I found out that power lines are unprotected, and birds can die if they ground themselves by touching something other than the power line. I didn't recall ever meeting this neighbor before this day, and I don't know that I ever saw him again, but he may have saved my life that afternoon. Since I didn't understand the significance of what had just happened, I doubt I even told my parents about it.

I don't know what the odds were that this mystery neighbor would have been looking out the window at just the right time. I don't believe in guardian angels, destiny or fate, but I also don't want to look too hard behind the veil. Happy to have a little mystery, and be thankful when story ends happily.

This is a post I have been avoiding writing. In a similar way, when my marriage was crumbling I didn't write about it publicly, maybe hoping to put off the inevitable outcome, and keeping it to myself in the meantime. But like so many things I have written about here, avoidance and trying to go it alone only leads to deeper troubles. Unable to see most of you in person these days, I will start the process here, beginning to work through it by getting it out of my head and down on paper.

My brothers and I have been meeting once a month off and on over the last couple of years to grab a beer and catch up on life. This has obviously been paused during the pandemic, but in late October a gathering was called, and we were told about the diagnosis.

She has been diagnosed with Multiple Myeloma, a cancer that forms in white blood/plasma cells. It accumulates in, and attacks your bone marrow. It was discovered when my mom was having back pain. After a couple of appointments, they discovered she had some broken ribs. This made them look a little closer, and they found the cancer, which had been basically dissolving the bones. As a strange coincidence, though multiple myeloma is a relatively uncommon cancer, this is the same type of cancer that my former father in law had.

The cancer is in the later stages, and the outlook did not look good on initial diagnosis. Mom was put on a chemo regimen, taking a pill once a day in three week cycles. In the beginning, Mom was in a lot of pain due to the broken ribs. Every movement seemed to hurt, and she was very frustrated. Unfortunately, a few days before Thanksgiving Mom went downhill rapidly. She was lethargic, somewhat unresponsive and been sleeping most of the day.

She was taken to the hospital the Tuesday before Thanksgiving and was there for a week. We brought her back home, hired in-home healthcare to help during the daytime, and I moved in to help out in the evenings. She briefly improved, but a couple of weeks later she was back in the hospital for another two weeks, coming home the evening of Christmas Day.

Of course, since this is all happening in a pandemic, she couldn't have any visitors while she was in the hospital. We weren't even allowed in the building, so she was going through this all alone. I can't fully understand what that was like for her. They released her on Christmas, not because she had improved much, but because they weren't getting anywhere in improving her physical health. She was too weak to be moved to skilled nursing care, so home was the only real option.

She has been home again for almost a month now. On one hand, being at home is better for her mental state, and her ribs seem to be mostly healed. However, she is still weak, unable to do much more than lie on the couch during the day, and often has difficulty following trains of thought. Strangely, her decline does not seem to be directly related to the cancer, as those numbers seem to be responding to the chemo. It has basically been diagnosed as "failure to thrive", a phrase that seems to put it all on her (and us). She definitely isn't eating or drinking enough, and that is contributing to the inability to get better. I don't know if it is a confluence of the multiple drugs she is on that is making her not want to eat, or if it is something else.

We are trying our best. There is still a healthcare worker there during the day, and one of the brothers is over there every evening to see Mom, and help Dad out with her evening care. But we are at a loss right now. We aren't seeing any real progress, have fewer answers, and we just generally feel helpless.

There is much more to process and work through, more detailed stories to tell, but this is a starting point of where we are right now. Thanks for reading, for being a part of my circle, and for being part of the conversation.

As always, hug your humans (when it is safe to do so).