The phrase in the title is something we say/sort of a meme in our biking group. It is not quite to the level of "Hold by beer", but we say it when we are about to do something, shall we say, not well thought out.

It started on a ride in Wenatchee. We had all signed up for a 100 mile bike ride, but we weren't in the best of shape, and the temperatures were going to be pushing 100 as well. We agreed that we would ride out about halfway and call it good. The turn around point would be at a small rest area after a gradual climb. The road after that was a very steep downhill that of course we would have to climb up on the way back.

I don't remember whose bright idea it was to press on once we got there, but I wasn't excited about the decision. But I said, "Well, I've done stupider things..." as I agreed to follow the leader. It ended up being a long, hot day, but we made it through and up that hill, and had more stories to tell.

My experience at the Oceanside Half Ironman back in October may have set a new bar for stupid decisions for pressing on when unprepared.

As I have mentioned before, I had signed up for three triathlon events in 2020. All were postponed eventually to 2021. The Oceanside event had actually been postponed three times - March 2020 to October 2020, to March 2021, to October 2021. I hadn't been running this year because of lingering pain, that I eventually found out was arthritis in my hip. I pushed the other triathlons into 2022 in the hopes physical therapy would help, but I decided not to push the Oceanside event.

I decided to go mostly to see my friends. Plus the re-scheduled date was in March of 2022, so less time for PT and, well, tax season. I still couldn't run, so I thought maybe I could do the swim and bike this time around, and then just step off the course. Problem was that along with not running all year, I had not done any swimming or biking either. It was part of the mental tailspin I was going though, with a side of laziness. After wrapping up tax season on October 15th, I had basically ten days to get in "shape".

I hit the pool a few times and went on two bike rides. The first swim was ugly, but the last couple went pretty well. The bike rides were less encouraging, but if I didn't make the time cut off, so be it. I was already planning on not finishing the event by skipping the run.

Once I got down there though, talking with my buddies who were doing the race as well, expectations started to rise. Maybe if I didn't implode on the bike, I would have enough time to brisk walk my way through the run course. It was a two lap course, so I should at least be able to make it through one lap before the time cutoff.

The morning of the race was that regular mix of excitement, anticipation, and standing around. The swim was a rolling start, and we had put ourselves toward the back of the line based on our anticipated pace. It was a really long wait, but eventually the three of us hit the water at about the same time. It went pretty sideways from there.

It was a beach start into the ocean, and I had a tough time making it through the surf. Two strokes forward, get thrown back two. I saw a guy hanging onto a surfboard hurling into the ocean, so I wasn't the only one getting beat up. By the time I made it through the surf, I was tired, frustrated and had drifted offline for the course. With the continuing chop in the water, it was hard to see where I was going, and I couldn't find a rhythm. I said to myself more than once, "I hate every minute of this." I have never felt that way in any previous event.

I kept swimming, trying to keep on course, trying to find a rhythm. The course was basically a square around a peninsula. Head out from the beach, hang a right to parallel the beach, another right to go past the point, and another right to swim in the harbor behind to the boat launch. About two thirds of the way through the third leg, I had a massive cramp in my right calf. 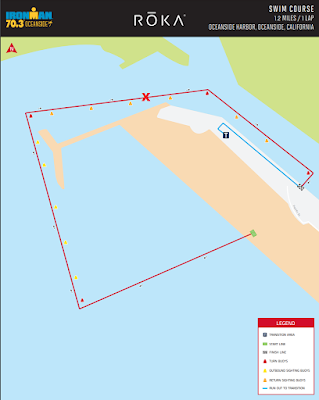 The cramp stopped me in my tracks. I tried to get vertical so I could tread water, but the buoyancy of the wetsuit made it difficult to get my legs underneath me. I was not bashful about screaming because it, hurt, so, bad. Pretty quickly a swimmer offered to let me hang onto them, but I let him go on. There was a volunteer on a surfboard within shouting distance (and I was certainly shouting), but he never came over. It felt like it took five minutes for the cramp to go away as I tried to relax through panic, and for a fleeting second I thought, I could drown in sight of land.

The cramp eventually settled down, and I slowly made my way around the rest of the course, swimming gingerly toward the boat launch and finish line. But the worst was yet to come.

Can’t wait to read the rest!! Happy to read your writing and anxiously awaiting the next entry!!