Swim, run, bike. I had done the last two pieces for years, but the first one was a relative unknown.

As I mentioned in the previous post, I did a bit of swimming in 2009 but it had been a solid decade since I had been in a pool. I found my way back for some swimming during tax season and then again in June/July once I had put my marker down on an event. The swim stroke is a bit like the golf swing - many tiny things to consider, and you don't really get good at it until you can stop thinking about all those little things.

I signed up for the July 21st Seafair Triathlon which is one of the few triathlons in the Seattle area. It takes place at Seward Park where I had done several runs, and the bike route was along Lake Washington where I had ridden many times. It was nice to have a familiar setting for this new adventure. Packet pickup was the day before the race, and they marked up my arms and legs with my race number and age. 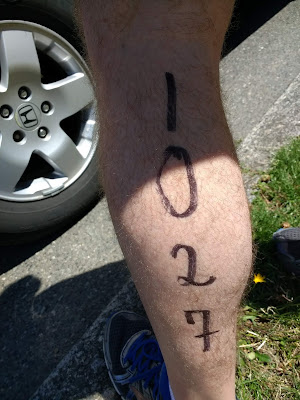 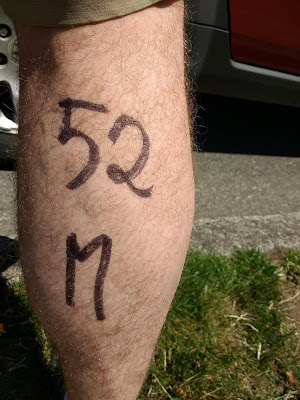 I suppose that doing this the day before saves some time on race day, but some of the black Sharpie ended up rubbing off on my bedsheets.

It was an early night since my alarm would be going off at 4:40 the next morning. When I turned out the lights, the sun was still up, and a beam came through an opening in the curtains. It focused as a spotlight on this photo of Sierra and me, so I took that as a good sign. 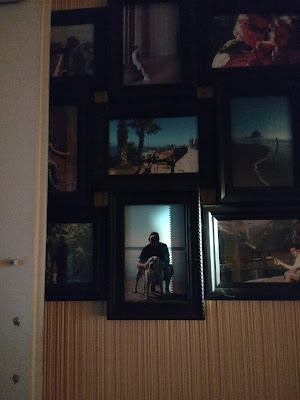 I arrived at the start line early, like I always like to do. I like to avoid the last minute stress of running around, and I also like to take in the energy of the start line. This gave me some extra time to re-rack my bike after I figured out I was in the wrong spot, and to hit the restroom several times (those wetsuits really squeeze the bladder). I ended up with extra time as the start was delayed 20 minutes, and I was also in one of the later starting waves due to my "seniority" of age. 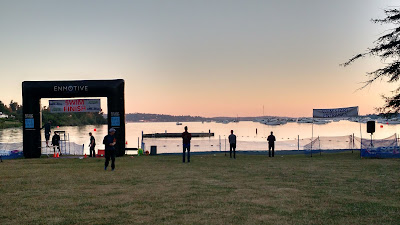 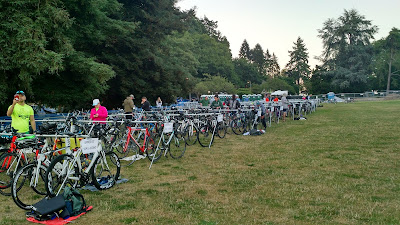 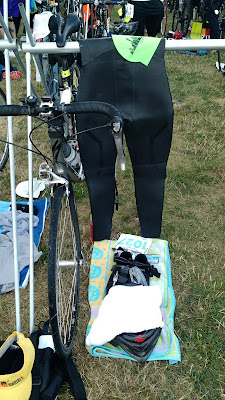 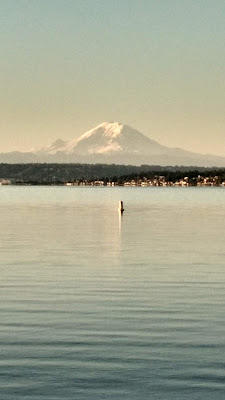 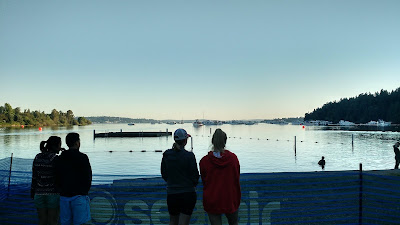 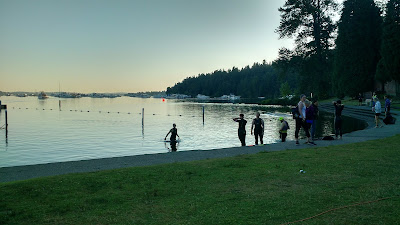 It was finally time to start.

My group of 50 year old guys waded into the lake and waited for the horn. I set myself up in the back right to avoid the mayhem of the start. Figuring I would be one of the slower swimmers, I just wanted to stay out of the way.

The swim ended up being a bit of a struggle. I did a terrible job of sighting, so added some extra distance to the planned half mile swim. I also panicked a bit, ended up out of breath and had to do some slow strokes just to gather myself. It felt like I was out there forever, but it ended up only being a bit under seventeen minutes.

The last third of the swim I found a bit of a rhythm and started thinking about all the steps to take in transition. Once I reached the shore I walked/jogged my way to my bike. I managed to get my wetsuit off without too much trouble, then socks, shoes, helmet, bike and I was off to the next leg. I felt nauseous from the swim, but I was moving forward.

As I rode I began to feel better. I rode briskly, trying to press a bit without using up all my energy since there was still a run waiting. I began to pass other riders, but one of the bonuses of those Sharpie markings on our legs was being able to know who I was passing. I saw very few of my age group out on the ride, and was mostly passing people from the earlier waves. The route along the lake is a beautiful one and soon we were at the turnaround point. I continued to press, feeling a bit better as the miles ticked by. Soon I was back in transition, ready to swap my wheels for running shoes.

After racking my bike and switching out shoes, I made my way out of transition for the second time. My legs were feeling pretty spent and jelly-like. It felt more like shuffling than running, but even so I was starting to pass a couple of people. I just tried to keep moving forward, easing up to that line of what I had left in the tank and trying not to go over.

The route around Seward Park is only about two and a half miles, so in order to do a proper 5k we had to head inland and uphill. Parts of it were steep enough that I had to walk, but I wasn't going much slower than the people trying to run it. Power walking for the win.

Then it was downhill and onto the flats again. When I saw the finish line I didn't have anything in me to sprint, but I finished relatively strong. And that finish line felt really sweet. 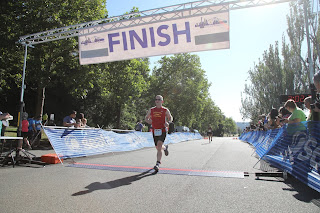 When I was in the middle of the swim, mildly panicking and veering off course, I had serious doubts about the Olympic Triathlon I had planned a month later, much less anything longer. But after crossing that finish line, I knew I was hooked. 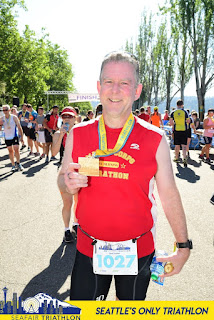 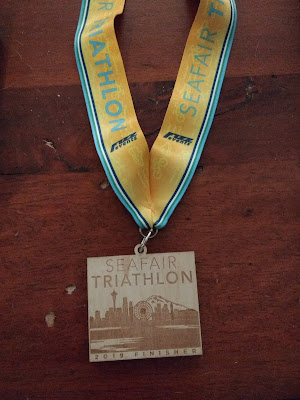 Email ThisBlogThis!Share to TwitterShare to FacebookShare to Pinterest
Labels: triathlons