Work is full on into the crazy season now. I still have Sundays carved out to get outside, but other than that, it is head down, trying to get it all done before the deadlines go flying by. Insomnia is making it more difficult, but at some point I think even that will give way to fatigue. Sundays will disappear at some point, but it is the calm eye of the storm for now.

These videos have popped up lately, and they are moments of simple happiness. Animals can be that calm in chaos, eyes in the storm, bringing forth a smile where you didn't think you had one. I hope they turn your day around like they have mine.

It is just another Friday, really, but it started off well. I walked out the door, still greeted by my reversed Welcome mat. 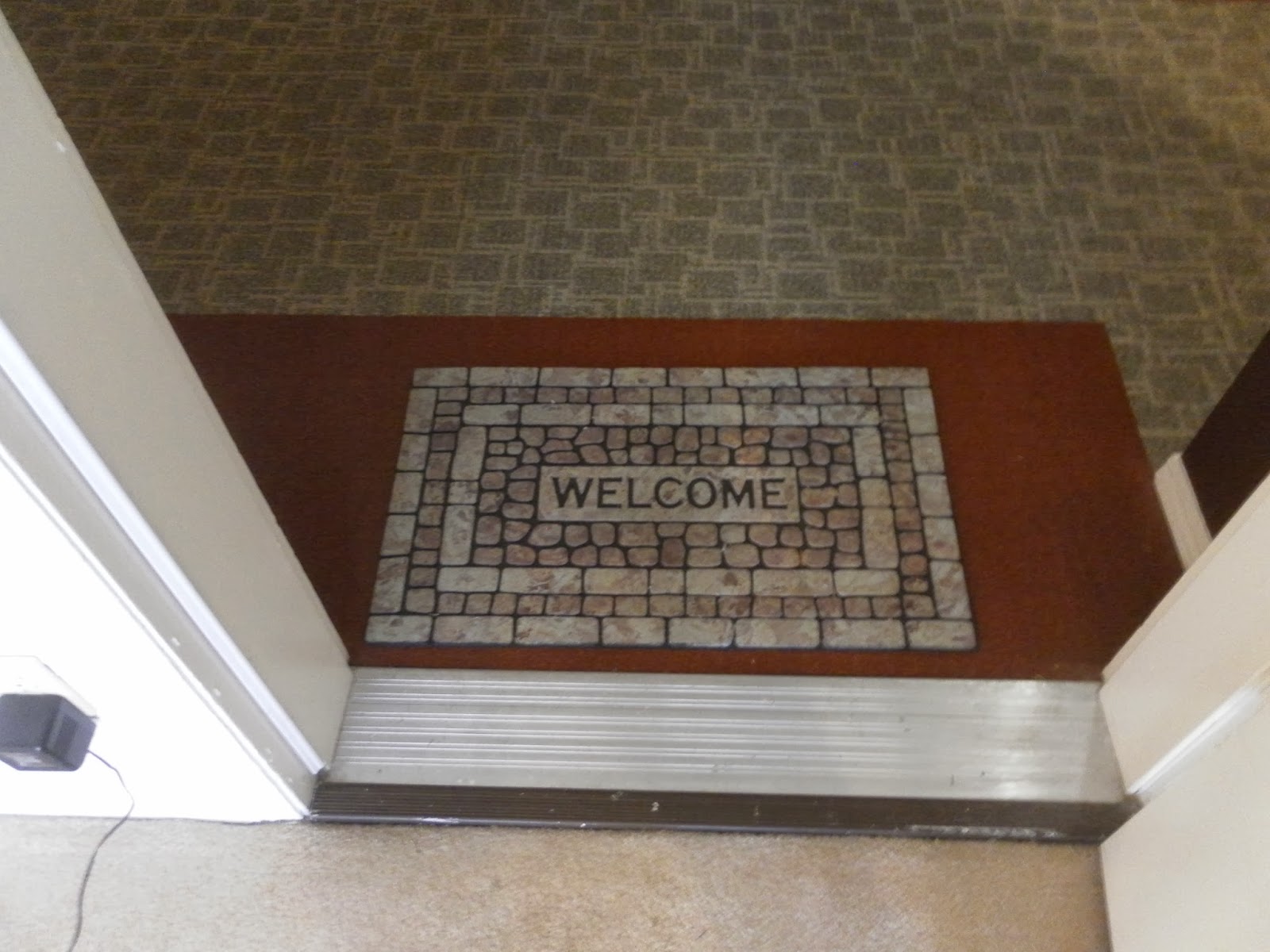 My apartment has interior hallways, and one time after they vacuumed, they set my Welcome mat in reverse. I have decided to leave it this way. Now the world welcomes me every morning, and it starts me off on the right foot.

Anyway, as I left the parking garage, there were two deer walking across the road to the grassy area near my building. I had just reset my phone, so there was no chance for a photo, so I just paused and stared at them for a moment. They were still, but ready to move if I did. So I didn't. I eventually drove on, my heart rate down just a bit.

Not a block later, I reached the apartment office where they were handing out donuts and coffee. The managers had mentioned this a couple of weeks ago, but one small bonus of a bad memory is you get to be surprised more than most. I hadn't even left the complex, and a Valentines Day with no expectations was starting off well. 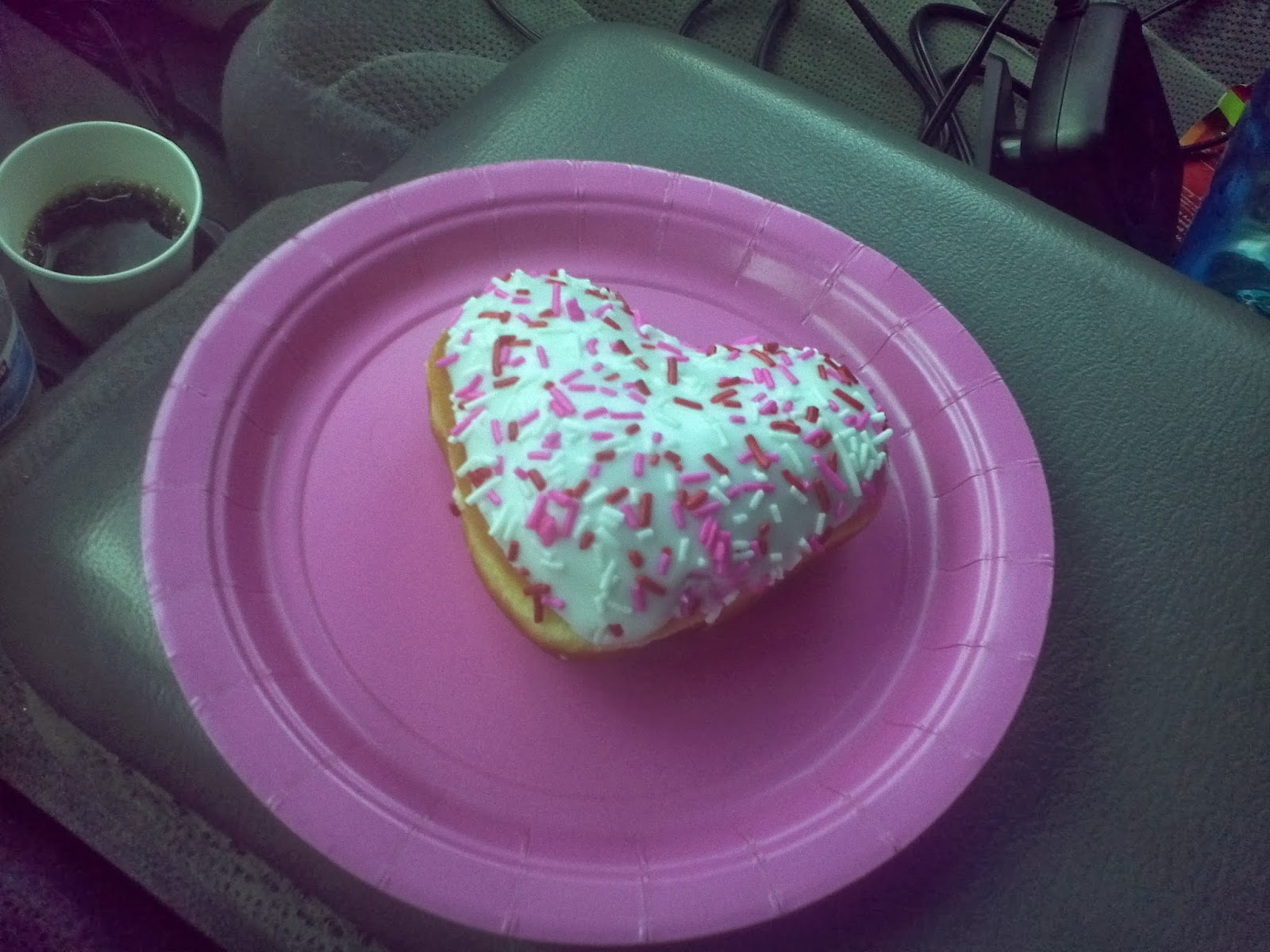 I reached for the iPod to choose a podcast to listen to on the way in to work. I had seen this great Google Doodle when I turned on the computer to catch up on things over breakfast.

When you click on each candy heart, you are treated (treated, ha!) to a different short story about love produced by Ira Glass and This American Life. The doodle changes each day, but I think this (link) is a more permanent one so you can check it out whenever you wish. I only had time to click on two of them before heading out, but This American Life was on my mind when I reached for the iPod, and I found a Valentine's Day episode waiting for me.

The intro segment was a repeat of the segment I wrote about six years ago in a post Never tell me the odds. In it, the authors present a picture of what a long shot it is to find your special someone, with a spin on the Drake equation. When I originally heard and wrote about the story, I was part-way through marriage counseling that would ultimately fail. Even though I don't subscribe to the theory that there is only one person out there...the odds were long back then, and now, well...

That said, Valentine's Day is not a bummer. Sure, it would be wonderful to have a special someone in my life again, but I still feel like a not-ready-for-prime-time-player. I am caught between feeling like I am and would be a better partner, and being unsure that I have enough to give just yet. So I am not really looking. Of course, so many of these stories seem to say that it that is exactly when you find love.

But what are the odds of that?

This weekend seems so quiet, and not just because of that wonderful stillness of a snow covered morning. 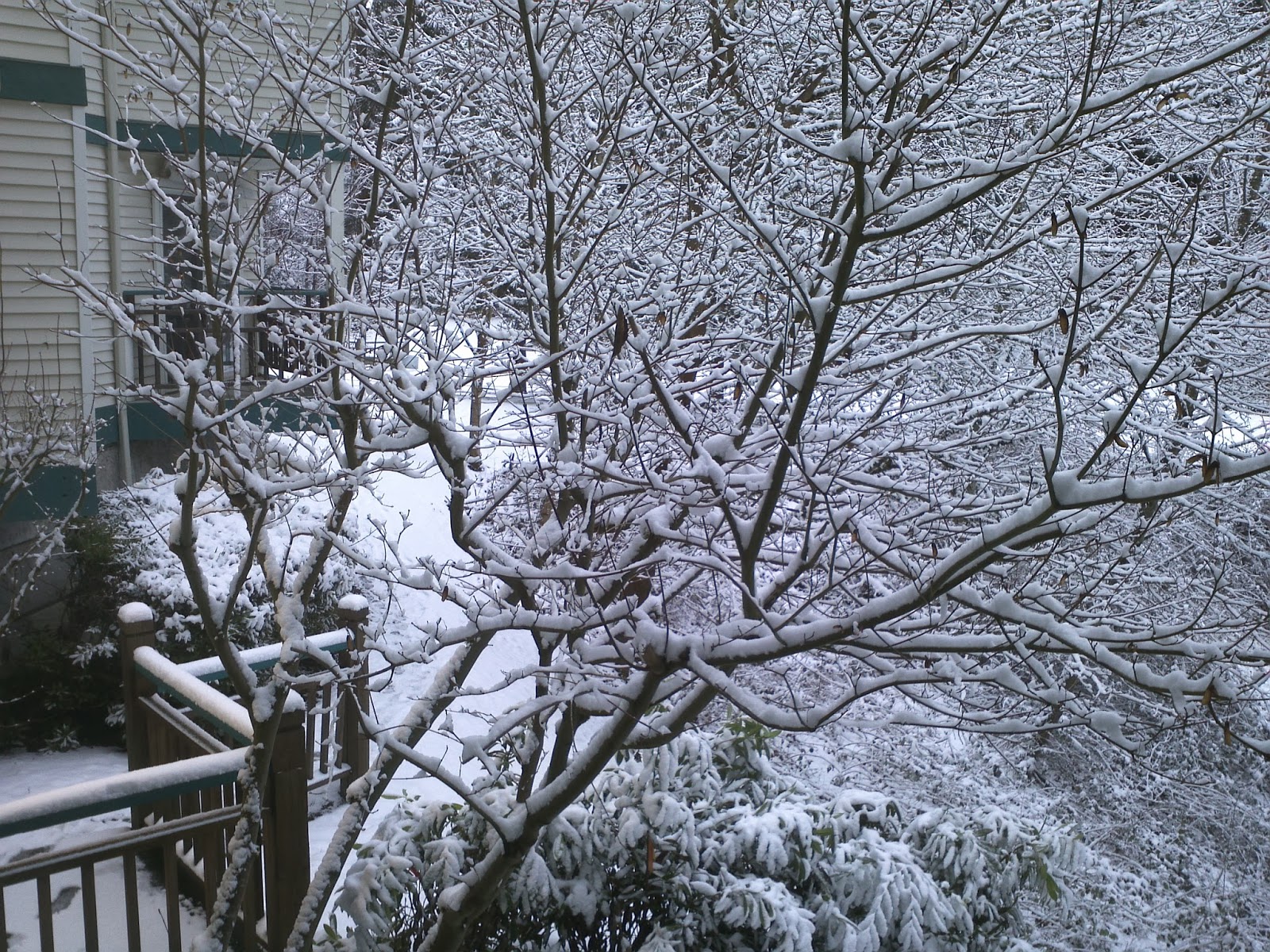 In case you somehow hid from all the media hype leading up to it, or missed the crushing game, the Seattle Seahawks won the Super Bowl (or the Superb Owl to avoid any trademark infringement). This season was really something special. It rewarded the diehard fan who has endured more losing than winning in the past 38 years, and had so many hopping on the bandwagon to enjoy the ride to the finish.

We sensed this season would be something special as we had made it tantalizingly close to the NFC Championship last year. Even the national media was picking us as favorites before the season started. It was strange to see, as this corner of the country is usually ignored, unless we are legalizing marijuana or something. It also made most of us nervous as our teams have been known to not live up to the rare hype thrown our way.

But this year was different. The team was different. Young, aggressive, and hard to predict. They would dominate one game against a contender, and the next week squeak by in overtime to a struggling team. Our quarterback was constantly scrambling just to stay alive, and just when you thought he was toast, he would sneak out of it and zip a pass to a receiver. They were never boring and I tried to catch the game somewhere each Sunday.

The team reminded me of the UW Huskies during their national championship year. A decent offense, but what really set them apart was the lightening fast defense that dominated the game. They put so much pressure on the opposing offense that they crumbled. The quarterback spent much of the game on his back, and the running backs had nowhere to run. I was a student at the UW at the time, and back then season tickets could be had for a song. Game days were incredible, and I can remember the feeling of being part of something big.

Another similarity is the volume of those stadiums. The "wave" is credited with starting at the UW, and I can remember how deafening that stadium got when the other team was on offense. Seahawk fans have set Guinness Book records for volume, and of course there was the "Beast Quake" where the cheering and stomping of feet registered as an earthquake. (full run)

The Hawks brought the city together like somehow only teams can. It was very similar to the Mariner's incredible "Refuse-to-Lose" season of 1995. Another band of mostly small name players, playing above what everyone thought they could, and a different player coming through in the clutch each week. The Seahawks were the second youngest team to ever play in the Super Bowl, and not one of the players had been there before. Many were low draft choices, passed over players led by a too-short quarterback, their coach criticized for being too much of a enthusiastic cheerleader.

Just as with the 1995 Mariners, you could feel the energy of the city rise as we began to believe this team was for real. The town was awash in shades of blue and green, football jerseys were worn by kids and grandmothers, and the 12th man was everywhere. 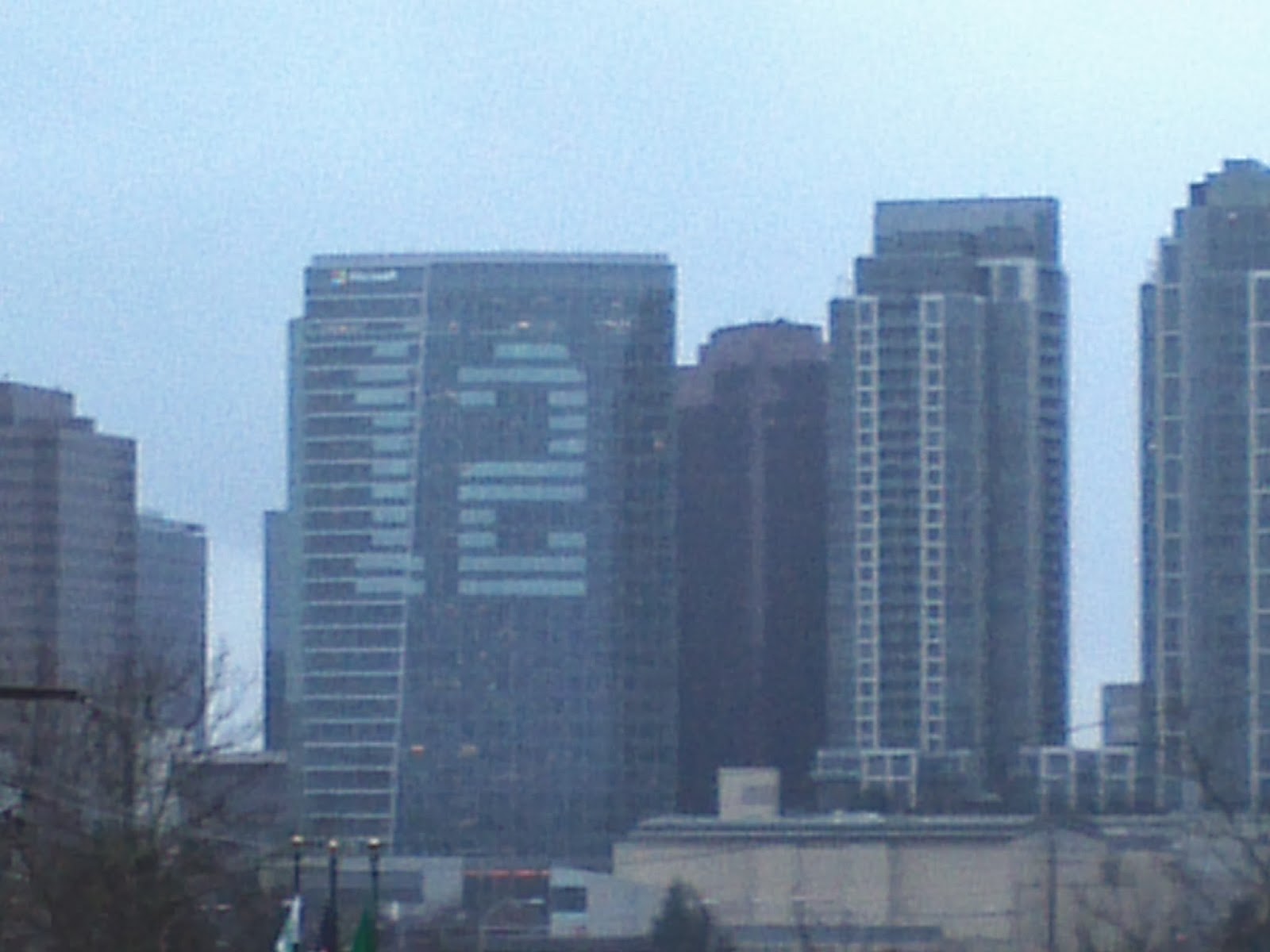 The game itself wasn't much of a game in the competitive sense, but oh what a performance by Seattle. I was amped even before the game began, amazed by the season, but still wondering if we would once again fall short. From the first snap it was clear this would be our day, and I stood cheering and stomping for the entire contest (with occasional trips to the snack table).

I don't pretend that their victory is my victory. My screaming and yelling in front of the tv does not make me a teammate, and I don't live and die by whether my team wins or not. Still, this was one of those rare seasons where you felt like you were part of a bigger community. I will never forget that incredible feeling when Edgar ripped "The Double" to beat the Yankees in extra innings to take the series. It felt like we were all willing Griffey to beat the tag, and when he did there was an eruption of joy and hugs with friends and strangers alike. But even that Refuse-to-Lose team fell short, losing the next series and failing to make it to the World Series.

The Seahawks didn't fall short, and I don't think I will ever forget this first Super Bowl win. It didn't have that electric shock of a last second victory, but I don't know that I will ever see a team rise to the occasion like this one did. It was 60 minutes of incredulity as "our" team dismantled the best offensive team in history. It is just a game, but in the moment it felt like so much more.

The victory isn't ours, it belongs to the teammates playing better than anyone (outside this city) believed they could. The pride, however, spills out across the region, and for a town with a reputation of Seattle Freeze, this team has us hugging strangers again like long lost friends. 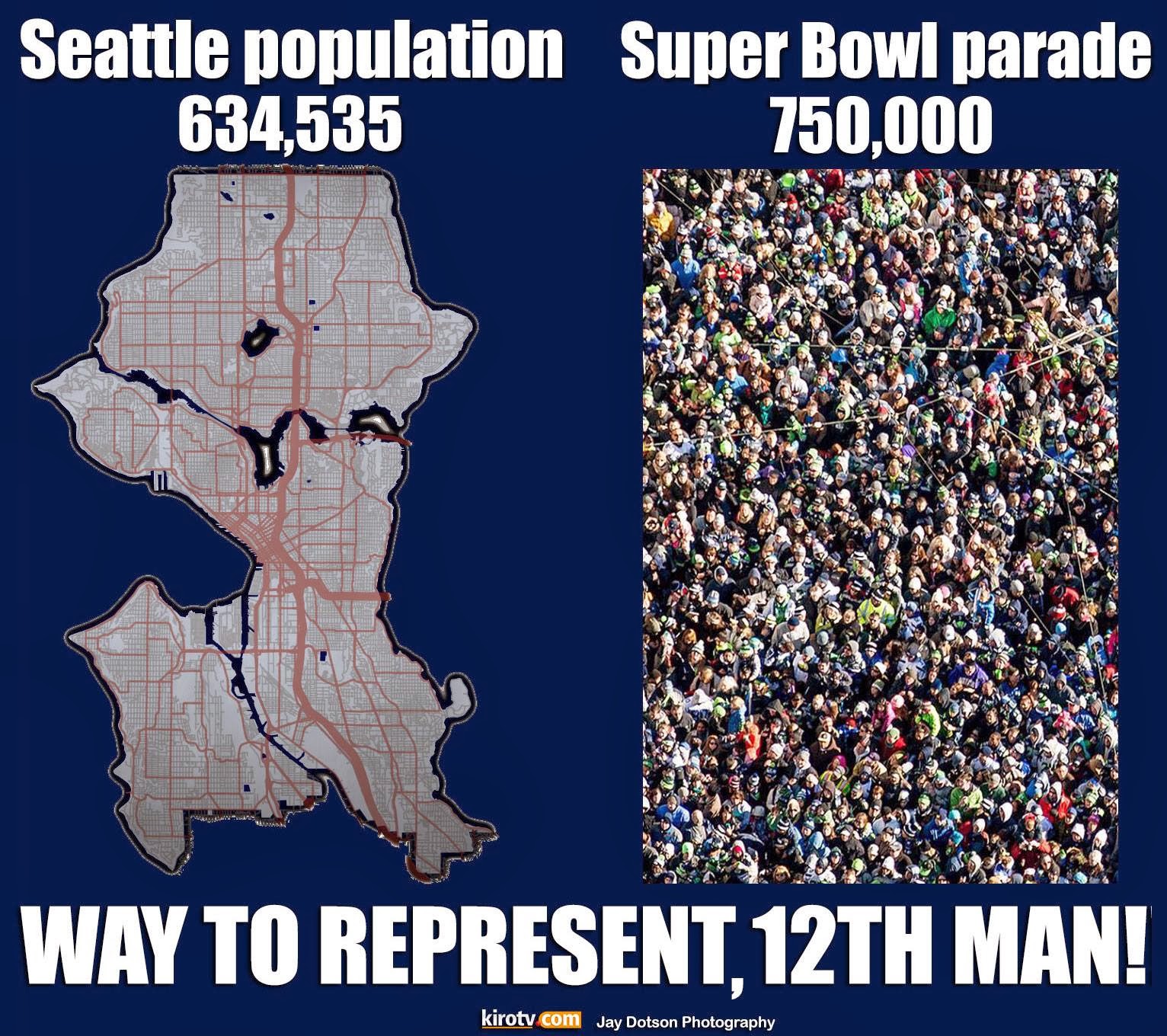 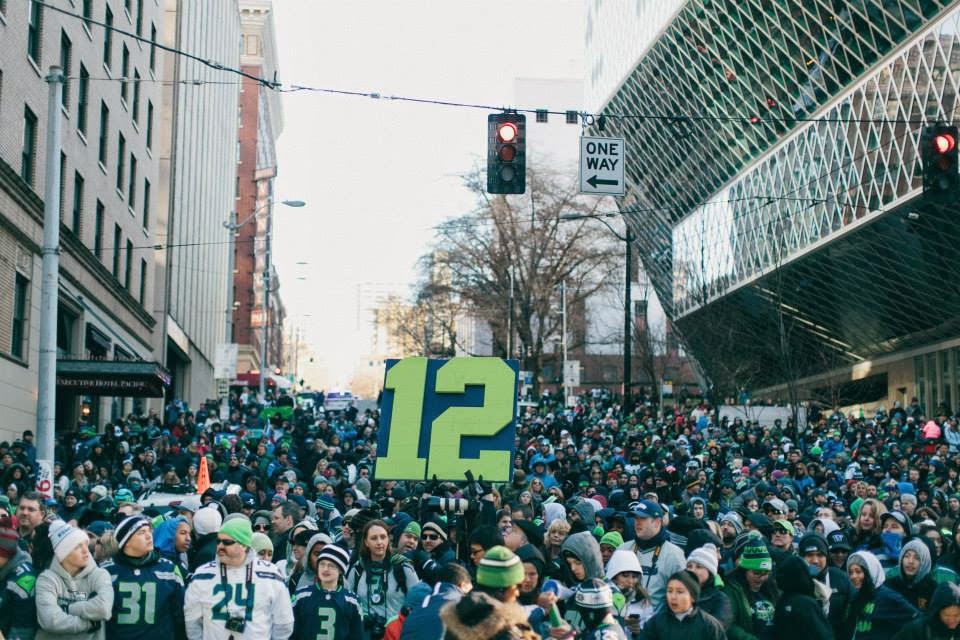