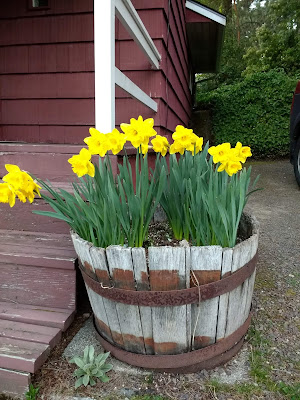 This barrel was here when I moved in. In four years I have done nothing to it but watch it fall apart.

Yet every spring, the flowers appear. Planted by someone else, they return each year, reborn.

You never know all the beauty you leave in your wake, or who it may help when you've long forgotten the small seeds you dropped.

Then I met somebody.

Our first date was at the end of November, and December was a whirlwind. Getting to know each other, learning each other's stories, reminding ourselves what it is like to have someone else in our lives Along with our other dates, we also went to several gatherings with friends and family throughout the Christmas season. It may have seemed odd to introduce someone to your friends and family within the first few weeks of dating, but it really didn't feel odd at all. I have never started out a relationship where we so immediately connected and freely shared our beauty and baggage. It was refreshing how open we were. Maybe it is a stage of life where you just put your cards on the table and say "this is who I am", and it felt great.

We kept joking that January would be so boring after such a busy December, but I felt no let down. Of course our schedules were back to the normal work hours with some late nights, but we managed to fit in seeing each other as a priority. We went on a wonderful Mount Rainier adventure together over the new year, and made several plans for the months ahead. Plane tickets were purchased, event fees were paid, etc.

I meant to come back here to write about this exciting turn of events. Maybe part of the reason I put it off was that I knew she read this blog, so it added a bit of pressure to what I would say. Too much, too little? As a side note, it is an interesting experience to date someone where they have access to twelve years of your life to read about online, as well as to a book you wrote that is also deeply personal. Like I said, cards on the table.

Another reason I didn't return to the blog is that I often turn to writing to sort through my feelings and I guess I just didn't feel like I needed it at that point. Mainly I think I didn't write because I was just busy being happy.

Unfortunately, she broke up with me last weekend. No real explanation, just that it was over.

To say that I was surprised would be an understatement. Again, I felt we really connected, and my friends and family loved her too. I hadn't seen any red flags, hardly any even in washed out shades of pink. But now I am rewinding through the past three months, reviewing things that I may have missed in the moment that now take on a different meaning. Was it this or that small moment where things took a turn. When we kissed goodnight after our Valentine's dinner a week earlier, did she know then that it would be our last? I won't write about any guesses here because they are just that, guesses.

It is strange now to look at the last post I wrote here, all about the damage it did to my recovery to not know why my marriage ended, and to now have this post backed up against it about another breakup where I feel clueless. Before she left last Saturday I asked her that even if she couldn't tell me right now the "why", I  hoped that she would sometime soon, and she agreed to try. The not-telling may feel like you are sparing someone's feelings, but at least for me it means spiraling thoughts of doubt and endless questions. If it is something that I am unable or unwilling to change, then that would be something, understandable. Beyond the not knowing, I guess it just pains me that she couldn't trust me to have a conversation about what was on her mind.

I went out on a ten mile run last weekend an hour or so after the breakup happened. I have to say that the run did me a lot of good in starting to sort things out. It gave me a chance to be alone and in motion, feel a little less helpless, swap a little emotional pain with the physical. In the intervening week, friends have been very supportive, sitting in the moment while I take my time working through this. I remain lucky.

I don't know what the future holds for either of us. Will our paths remain separate or intertwine again in some way in the future. What will be the thing(s) that I learn this time around. Is it a good or bad thing that a three month relationship means so much. Will I fall back on the bad habit of trying to protect my heart, or will I risk it by remaining open. When will there be fewer questions.