Gadgets, silly challenges, and lucks of the draw

I have been reasonably active for the past fifteen years, ever since my friend Cherie got me into biking and running. It peaked in 2012 and 2013 with some accomplishments that when I look back on them, rather amaze me. Three marathons in November of 2012, two of them on back to back days. and in the summer of 2013 a one-day STP followed a week and a half later with the Ride Around Mount Rainier (Ramrod).

Sure there have been a few marathons, another STP and another Ramrod (fortunately in different years this time around) in the meantime, but the last couple of years have felt decidedly lazy. As I have mentioned before, I really need an event to aim for to get my body out on the road. This even when I know how much good it does me. When I don't have this outlet, my mental and emotional states suffer, and things can spiral (another post).

Anyway, I needed something to change so I bought a new toy and set myself a silly challenge.

The new toy was an upgraded GPS watch. Though my previous version was three generations old, it still worked fine, and I rarely replace something that still works even partially. I still use this 25 year-old broken mirror when I cut my hair, and I still have the backpack that I bought for college in the late 80's (though it has been downgraded to carrying running gear and/or work files during snowstorms). 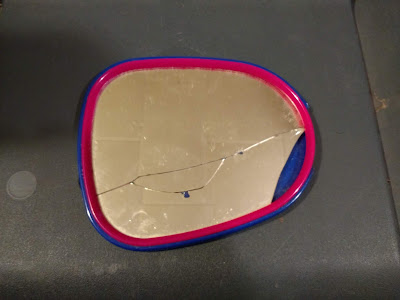 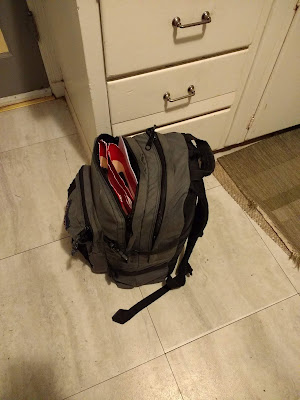 But this time I bought the thing that I wanted, if not exactly needed. I bought it because I knew it would make me happy, and it would make me go out on a run to play with it. Along with a better GPS receiver, it has more bells and whistles and you can even download custom watch faces. I found one that lets you put an event countdown timer front and center. Gotta keep that motivating event in front of you. 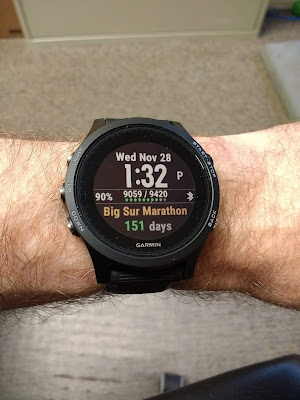 And I love it.

To kick start my running again, and maybe justify the purchase a little bit, I set myself the challenge to run every day from Thanksgiving to Christmas. This would reinforce the habit, create a bit of a fitness base for the marathon training on the horizon, and maybe stave off a few pounds during the holiday season. The only requirement was that I run at least a mile each day.

It started with a Turkey Trot on Thanksgiving and ended with a three mile run around my parent's neighborhood Christmas morning. Thirty four days on the calendar, thirty four days of me running with questioning it, and I felt better than I had in a while. Marathon training started just a few days later. I had low expectations this time around since training would be entirely during tax season, but at least I was starting off on the right foot.

January went well, but sickness and snow took me out for a week and a half in February. Then in early March I threw out my back and missed another two weeks. In the time since I have had to ease my way back, pitting getting the training in against the possibility of making my back worse. The hours at work were ramping up as well, so that was another balancing act, and plantar fasciitis has been a pretty constant companion through it all.

I was very lucky to get this lottery slot into Big Sur, a marathon that has been near the top of my bucket list since I started running. A few breaks went the other way during training, but this marathon was always going to be a bit different. This one was about the experience - more about moments than minutes. I will be stopping to take pictures along the coast and doing my best to remain present, running the mile that I am in. My last marathon went rather sideways, but it made for an experience I have never had before. As I did on that day more than a year ago, I hope to embrace the day, whatever it brings.

Only a few more days to go. 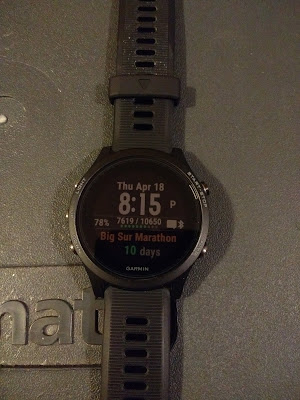