Biggest dog in the world

A friend forwarded this e-mail to me. Nice doggy. Stay off the couch.


Hercules: The World's Biggest Dog: According to Guinness World Records Hercules was recently awarded the honorable distinction of Worlds Biggest Dog by Guinness World Records. Hercules is an English Mastiff and who has a 38 inch neck and weighs 282 pounds.
With "paws the size of softballs" (reports the Boston Herald), the three-year-old monster is far larger and heavier than his breed's standard 200lb. limit. Hercules owner Mr. Flynn says that Hercules weight is natural and not induced by a bizarre diet: "I fed him normal food and he just "grew"... and grew, and grew, and grew. 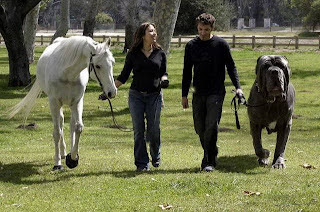