As I mentioned in my previous post, the Tour des Lacs was my first bike event and my first ride in the SAG wagon. This year three of us were riding the 64 mile route with another relatively new biker. He would be a good barometer to see if this ride was as difficult as I remembered. Another four friends were riding a different route, and we would meet them at the end.

We were up at 6:00am to get our butts and bikes out of the hotel. The ride has a pancake breakfast to get the riders full of carbs and caffeine. We hit the road at 7:10 and the first long hill was only 2 miles later. It was pretty steep and a tough way to start a ride. I had dressed lightly as I knew I'd be overheating on the way up this hill. The three of us made it one piece and continued onto the next hill.

About 10 or 15 miles in, there is a red barn to the side of the road. Five years ago one of our riders was checking out some cool ironwork on it when he veared off onto a soft shoulder and wiped out. I had just finished climbing another hill when I saw the barn. Just then I heard an odd sound from my front tire. I first thought my brakes were rubbing, but it was a rush of air from a blown tire. That barn is a curse! The tire had blown at the valve stem. I swapped out for another tube and we were rolling again.

Two miles later, the tire was flat again. As I started to take the wheel off, I noticed the valve wasn't completely closed. Hopefully this flat was just a stupid mistake on my part. I pumped the tire back up, but two miles later it was flat again. It turns out my replacement tube had already been patched, and the patch was leaking. Two ladies rode up from the opposite direction. They weren't part of the ride, and were just out on their own. They had passed by on one of my previous flats, and stopped to offer some help. They gave me another tube and wouldn't accept any money. Just pay it forward they said.

By the first water stop, my flat adventures and our slower pace meant we were the last bikers in. We were still on pace to finish in time, but it was a little close for comfort if we had any mechanical issues. We made our stop brief and hit the road again. One of our riders was having some knee trouble, so he opted to get in the SAG wagon for about 7 miles and would rejoin us at the next water stop. We were able to pick up the pace a bit, and we caught up with some bikers at the next stop.

This is where the route changed from five years ago. The last 18 miles goes along the Trail of Coeur d' Alenes, a converted railway. The trail is new and the path is very smooth. The first seven miles is a glorious downhill ride through the forest to the lake. It was a great reward after all that climbing. The trail continues along the lake and took us to the pier in Harrison. We actually arrived with an hour and a half to spare. The downhill and flat portion along the lake really helped. 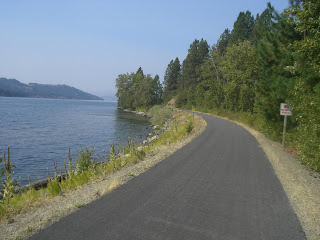 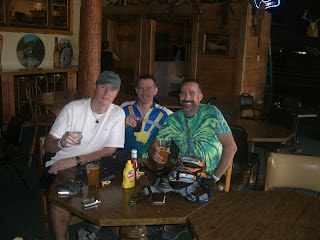 The boat ride was beautiful, and we met our friends at the dock in Coeur d' Alene. They had enjoyed their ride as well, and we would all be together on the same route the next day to head back to Spokane.

Our route the first day was certainly challenging. I am a better biker than I was five years ago, but it was still a tough climb. I felt a bit better about my DNF. Fortunately it is my only biking DNF so far (I have one in a marathon). The event boasts five different routes the first day, and two choices the second day. There is something for everyone, and the elevation charts they hand out help to avoid any nasty surprises. The support of the volunteers is great, and the two pay-it-forward ladies reminds me of the type of community bikers should be.
Posted by Sean at Monday, September 17, 2007