A Couple of new speed records


Gebrselassie broke the world record marathon time by 29 seconds at the Berlin Marathon. The record of 2:04:55 by Paul Tergat had stood for four years. Gebrselassie's new world record is 2:04:26.

33 year old Austrian Markus Stoeckl has smashed the World Speed Record for series mountain bikes. Stoeckl, nicknamed "Hercules" because of his 6'4", 220 lbs. frame, broke the 8 year old record by 14 mph on a 2000 meter, 45 degree run in the Chilean Alps. Because of the extreme cold, Hercules had to hold his breath for the 40 second duration so his helmet didn't fog up. 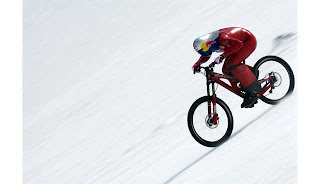