Well, the weather bureau did exaggerate a bit, but the snow is falling tonight. 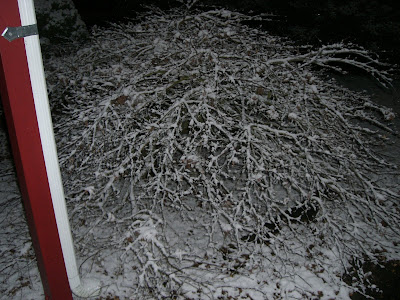 With the threat of snow and temperatures in the 20's, I spent the day tracking down chains and wrapping the pipes outside the house.

As we don't get lots of snow in the northwest, I have never bothered to get chains for my truck. Of course trucks have terrible traction to begin with, so adding chains is only a minor improvement. Typically if it snows I will drive my wife to the train and borrow her car which has all-wheel drive. For some reason I thought this year was when I would finally get stranded in my truck. So now I have $35 worth of peace of mind.

Since I redid the plumbing outside the house for the sprinkler system, the normal styrofoam hose bib thingy (that is the technical term according to the lady at Home Depot) no longer works. So I had to improvise something to insulate the pipes to guard against the freezing/bursting problem. The pipe wrap stocked at the Depot were not large enough to surround the 1" sprinkler pipe, so I had to use two pieces cobbled together. Duct tape and plastic bags were involved. My solution isn't pretty, but hopefully it will be enough.
Posted by Sean at Saturday, December 13, 2008