Yesterday was a long one out in the cold. The temperature hovered around 25 degrees during the day, and fell pretty quickly after sundown. The roads were a mix of bare and clean, and completely covered with ice. The city did some de-icing and sanding on some of the major streets, but many side streets shaded by tall trees never had a chance to melt.

When my driver picked me up, he had already tackled the neighborhood I was most worried about. Apparently the city (or maybe a hired contractor) made this hill a priority and he was able to climb the hill without chaining up. Unfortunately around noon we became stuck in someones driveway and had to get the chains to get out. This slowed us down and gave new meaning to vibration headache, but I did feel a little more secure on the steeper hills of our route. We were out until 7:00pm, and would have been out past 8:00 if another driver hadn't come to lend a hand.

I slipped a few times on the icy streets and walkways, but fortunately never took a spill. The words for the day were 'slow and deliberate' and I felt like an arthritic old man taking baby steps all day. Today promises to be more of the same. Hopefully the package load will be a little lighter, but I am guessing there will be no let up until Christmas Eve.

I had an appointment early this morning before work, so I had to brave the icy streets in my two-wheel drive truck. I loaded in some bags of concrete and rocks over the rear axle to try to gain a little more traction. The roads in my neighborhood were the worst and once on the freeway it was smooth sailing.

I had a reason to roll down my passenger side window this morning, and... 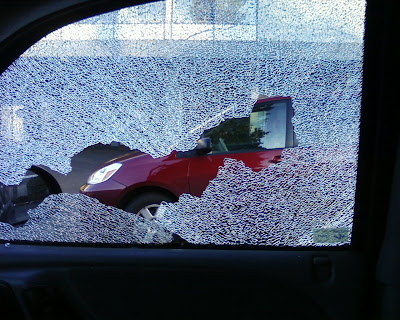 The window didn't make it a fraction of an inch before it completely shattered. Now my truck has that open door feel just like the UPS truck.

"Okay, campers, rise and shine, and don't forget your booties 'cause it's cooooold out there today."
Posted by Sean at Tuesday, December 16, 2008

Oooohhhh, how come that stuff never happens in the summer. Well duh, I know why, but still......