A Picture of Determination

On the fourth riding day of my Glacier Ride, I broke a spoke. My wheel went out of true immediately so I had to pull over. Fortunately I had a Fiberfix spoke and was able to repair the wheel enough to get to camp. My technical difficulties were not the worst of the day. Paula had her chain jam and it immediately bent her back derailleur. She was done for the day and needed a ride into camp. 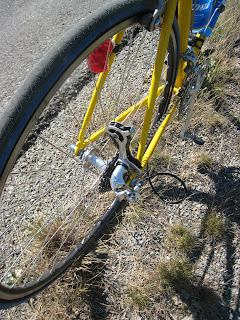 A spare rear derailleur is not something you normally carry with you, and there were no bike shops nearby. We still had two more days of riding, including the highlight of the trip riding through Glacier Park the next day. So when we got back to camp, our mechanic took the broken parts off of the bike. The solution to get her back on the road was to make her bike into a one speed. She had to pick the gear she would stay in all day. Tough choice. The day’s ride was a bit over 50 miles with a 12 mile climb to get to the top of Logan Pass. She would need a pretty low gear for the climb, but would then be stuck spinning on the flats. There was also a time limit to make it to mile 40. 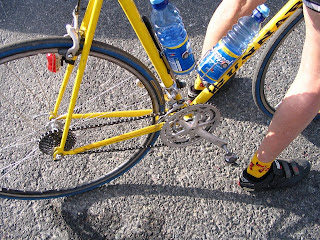 Well she made it with a smile on her face. One of the great thing about these rides is you are generally surrounded by people that don’t sweat the small (or big) stuff. I don’t think anyone would have thought less of her if she had hopped in the truck for the ride over the pass. But she picked a gear and just kept spinning. It just wouldn’t have been the same going through the park in a car. 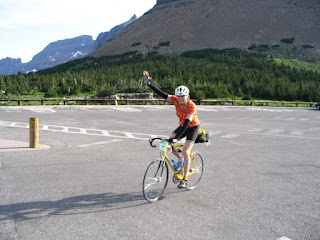