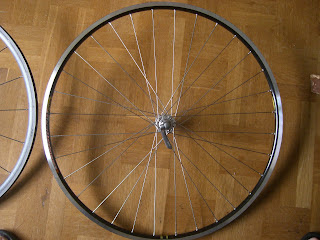 So I have changed out the wheels on my bike. The stock wheels that came with my bike made it about 2100 miles without trouble, but then things started to come undone. About a week before my trip to Glacier I broke a spoke in the rear wheel. The wheel went so far out of true that it wouldn’t spin, even with the brakes completely open. It was on the drive side, so even though I had a spare spoke with me, I needed some tools to get the cassette off. So a phone call, a ride home then a scramble to get it fixed. My local bike shop was able to fit me in to their schedule, repair the spoke and get the wheel back to true. They said that a good rule of thumb is that when you break your third spoke it is time to rebuild your wheel.

So I’m off on the Glacier trip, made it through 3 ½ days and about 255 miles, then SPROING – busted spoke. Again it was on the drive side of the rear wheel. Fortunately I had bought a “Fiberfix replacement spoke” (to be discussed later) and I made it back to camp. Second spoke broken on the same side of the same wheel. No further problems before I make it home, but it is clear that the wheel has been weakened.

I was looking for something more durable, yet pretty inexpensive. I was also looking for something with a higher spoke count. The rear wheel on my original wheels had 24 spokes. From what I’ve heard, I should have a higher spoke count for my aforementioned BMI level. With more spokes, the wheels should be a bit less likely to break a spoke, and if one does break the wheel should not go as far out of true. So now I have Mavic Open Pro wheels with Ultegra hubs and 32 spokes. Not quite as sexy, but hopefully I’m less likely to get stuck on the side of the road. I am hoping to learn how to build wheels so I can rebuild my original wheels. Just in case I drop my BMI factor. 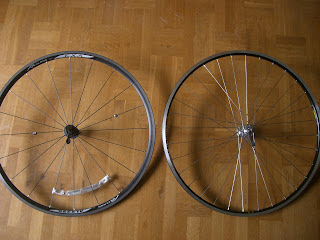