Halloween has never been a big deal for me. I have had a couple good costumes over the years - the first time I shaved my head was for a Jay Buhner costume, and I had a good Colonel Sanders costume complete with the white suit and hair. But these days I am happy to skip both the festivities and trying to figure out a costume.

In 2006, we were going to be out of town for Halloween, so there was no chance to go to a Halloween party. I was off the hook, or so I thought. The friends we were traveling with brought costumes across the country so they could dress up for the holiday. We walked around Washington D.C. and the wife and I were the odd ones out. 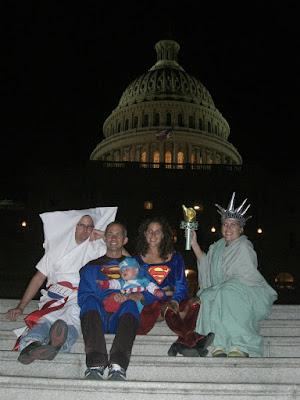 The last few years we have only had two groups of kids come trick or treating at our door. Not sure if this is a sign of the times or just our neighborhood. Parents of kids who take in the annual buckets of candy may want to hide this mornings paper. There was an article on the front page titled "Cavity-fighting trick: Eat treats at once". From the article:

Here's Halloween advice from a dentist, if not a dietitian: Let your kids eat their sugary booty in one sitting.

Dental decay is on the rise again among U.S. preschoolers, and frequent treats may be one culprit. But the amount of starchy, sticky foods children eat may matter less than how often they eat them. That's because enamel-eroding acids linger in the mouth for 20 minutes after each snack session.

So allowing your little princess to devour her Halloween haul instead of doling it out piecemeal is a lesser evil "from the point of view of cavities..."

And on the political silly season side of things, we have this poll - “Spirit Halloween Presidential Index”. It is based on nationwide sales of Halloween masks in the month(s) leading up to the election. Mask sales at Spirit Halloween have accurately predicted the winner in the last seven presidential elections. 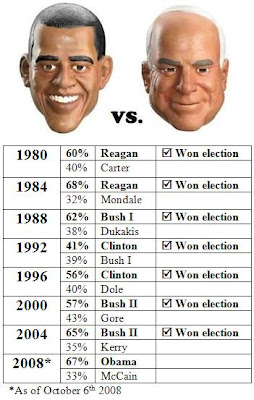 Those masks are scaring me. They're right up there with bobble heads...YIKES!