Weight has been a hot topic in the household lately. My housemates have a bit of a competition going to see who can be the first to lose a certain amount of weight. We have also been watching "Biggest Loser" and "Losing it with Jillian" on Tuesday nights for inspiration. The focus on exercise and eating better has been pretty successful. One of us has fit in a dress that has not been worn in a long time. I'm not saying which of us that is.

I have always been overweight, or "husky" as it was called when I was growing up. There was a brief period (about 9 months or so) when I was "thin", but that was fifteen years ago. I was down below 140 pounds, and I still keep that drivers license in my wallet. The thing that started me on my way to weight loss was a relationship breakup. My stomach was in knots, and food just didn't sound appealing. After some pounds fell away, I decided to start eating a little better.

Matt recently posted a shot of him 20 years ago, and what he looks like these days. Here is my own little version:

This is the picture on that 1995 drivers license still tucked in my wallet: 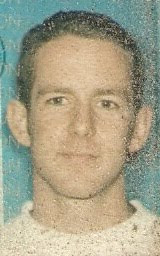 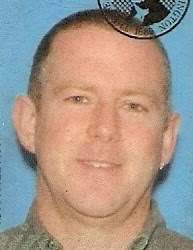 And a picture taken at the end of June this year: 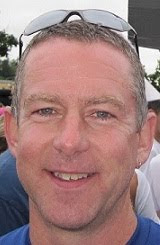 That 2008 photo was hardly my peak (low point?) for my weight. Looking back, I was only about eight pounds heavier than in the 2010 photo. Must be the terrible DMV cameras (or more likely my body fat percentage).

No, I think my highest weight was one Christmas a number of years ago when my wife gave me a digital scale as a present. The scale also measures your body fat percentage, and when a few of us stepped on to be measured, the results were pretty depressing. I don't remember specific numbers, but I was definitely over 190 pounds and 30% body fat.

I dropped a few pounds, but plateaued. Once I started biking, and then running, I was more concerned with what my body could do, than what it looked like. The next round of weight loss didn't happen until the end of 2008. The spark was two-fold this time. We had just started marriage counseling, so once again my stomach was in knots. The other piece of the puzzle was working for UPS for a couple of months, which meant I was running six days a week. I dropped 15 pounds and have been able to keep it off since then.

But I am on another plateau. I am so much more active now than when I was at my 1995 weight, but still 30 pounds heavier. It looks like it was all about what I was eating - diet vs exercise. But I wasn't doing anything all that special back then. The pattern I fell into was generally to have two "good" meals, and one not-so-good meal each day. I was working double/triple shifts at a restaurant at the time, so breakfast would often entail grazing at the salad bar as it was being set up, and dinner would usually be something sensible. Lunch was usually my splurge meal.

I am starting to think about looking into the possibility of making a decision about researching a strategy to create a plan...

Ah, I should just start eating better. Less late night snacking and empty calories. I'm not getting any younger, and I know if I fueled my body better my workouts would be more productive. That, and it is perpetual swimsuit season down here.
Posted by Sean at Wednesday, August 04, 2010

Email ThisBlogThis!Share to TwitterShare to FacebookShare to Pinterest
Labels: a better me, weight