I have worn an earring for about 15 years. My girlfriend at the time and I went to the mall the day after Christmas one year, and I left with my ear tagged. Turns out I ended up going to the same mall chain that Harrison Ford went to when he got his earring. Really butches it up, don't you think.

After whatever the healing period was, I replaced the silver stud with a silver hoop. It was a small hoop with a couple darker cross hatches. It was pretty simple, and some people didn't even notice I had one for a couple years. I didn't think too much about it, and would often forget about it myself.

And I never changed it. The same earring for more than 15 years. The only time it would come out was when I was getting X-rays at the dentist. Until last week.

I was at work and we were putting up an aluminum header for a cool, peaked roof cover. I was up on one of the top steps of the ladder, and I guess I shifted my weight the wrong way and suddenly the ladder shot out from underneath me. As I was falling, I managed to catch myself by grabbing one of the lower beams, so I ended up dangling just a couple feet off the ground rather than hitting it hard. But I smacked the left side of my face on the way down. As I was falling, I let go of the header I was holding above my head. It landed on the same lower beam, and that is probably what I hit on the way down.

I didn't notice it until I was home, but when I smacked my ear I knocked the earring out. I looked around the jobsite the following Monday, but I wasn't able to find it. So it was finally time to replace my 15 year old earring. I went down to Old Town and wandered around the shops, but of course most all of the earrings were shiny, dangly ones. I ended up finding some simpler ones at the Five and Dime shop of all places. I bought another hoop and will probably get a simple silver stud for those black tie events I never get invited to.

Since they were only about eight bucks a piece, I got a couple of fun ones. This is the current one. 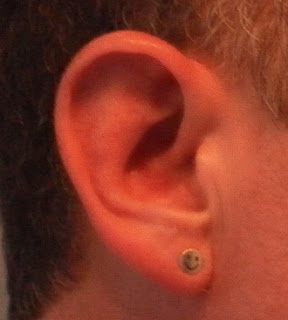