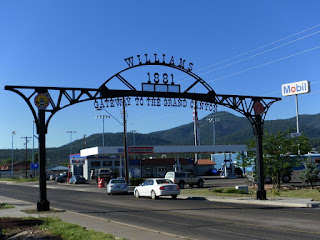 The rough schedule was to spend a day or so at the Grand Canyon on my way out to see friends in Phoenix. It is about a nine hour drive from San Diego to the Grand Canyon. I decided to stop off in Williams for the night as it is only an hour short of the canyon, and the hotels were about 60 % cheaper. The next morning I would drive the 60 miles into the park and start the day fresh.

Williams of course survives on people doing the exact same thing as I was doing. When I looked online, there were around 25 hotel options in the small town. I ended up choosing the least expensive lodging, and it ended up being a pretty cool choice.

The appropriately named, Grand Canyon Hotel claims to be the oldest hotel in all of Arizona. It opened in 1891 and once the railway to the canyon opened in 1901, the city and hotel became the launching point for people around the nation to visit our own 'wonder of the world'. 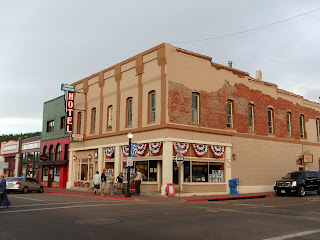 The historic route 66 runs right down main street of Williams, so the hotel and city also benefited from people passing through on "America's Highway". However, once I-40 pulled travelers off of route 66, fewer people traveled directly through Williams, and the hotel stood empty for about 35 years.

A couple bought, restored and reopened the hotel in 2004. The hotel has been restored, rather than remodeled. The wood floors look original, the rooms are small, and for many, the bathroom is down the hall. It is definitely a period piece, and they proudly advertise "25 beautiful individually decorated television free rooms." Williams still has that small town feel, and they have capitalized on the route 66 kitsch. The hotel fits right in, and it was great.

And I found a appropriately kitschy restaurant to complete the experience. I sat out on the patio for dinner, and there was a local guitar player doing covers and singing some of his own stuff. He was actually pretty good. I lingered for a while after dinner, relaxing after the long drive, and looking forward to the next day. 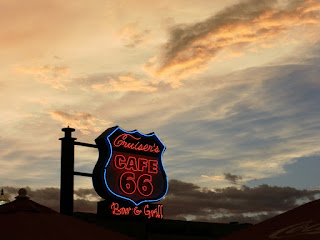