"No language can fully describe, no artist paint the beauty, grandeur, immensity and sublimity of this most wonderful production of Nature's great architect. [The Grand Canyon] must be seen to be appreciated."

After fueling up on gasoline and caffeine in Williams Wednesday morning, I headed north to the park. The road is a pretty straight shot through barely populated land. Much of the area was covered in low trees, short and round like all they had to do was dry out to become tumbleweeds. There was some road construction, so it took a bit longer than planned, but I still made it into the park by 9:30am.

I headed straight to the nearest viewpoint, and it...was...stunning. It would be the first of probably ten different viewpoints I would visit, and I would end up taking some 250 pictures trying (futilely) to capture the spectacle. I knew no picture would ever tell the story, but I couldn't help trying.

Grand Canyon National Park has several shuttles that will take you around the village and to all the different viewpoints (all included for the price of admission). It is a great system and eliminates all the crazy traffic that would otherwise exist.

After dropping off the truck, I spent a couple of hours along the Hermit's Rest route. A recorded voice would announce the next viewpoint as we drove along the route. I had planned on going straight to the end and working my way back, but I could not resist getting off the bus when I heard "now approaching The Abyss" (so named for the sheer drop off). Of course you are largely looking at the same canyon, but each viewpoint offered a slightly different perspective.

After grabbing some lunch, I listened to an interesting lecture on the California Condor. The endangered bird has been brought back from the edge of extinction, and there are a number of these huge birds that now call Grand Canyon their home.

After belatedly stopping by the visitor center, I checked into the hotel. It was not one near the rim, but it was still great to be staying in the park. It was a more traditional place with a tv and fridge, but it still felt a little rustic since this was the view from the room. 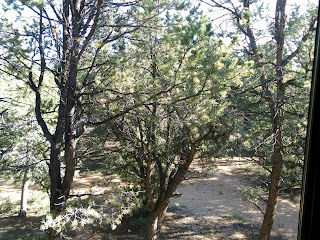 After getting settled, I headed back to the village. I wanted to see the sun go down over the canyon before grabbing some dinner. It was a beautiful night, and there were many people along the rim taking in the nightly show. Once again, pictures could not capture the beauty of the light playing off the rock walls, but we all kept trying just the same. And we would put the cameras down for long moments, trying to savor the images in real time.

Below is a small sample of the pictures I took the first day. The next morning, the Grand Canyon experience was somehow, even better. More on that tomorrow.