I went for another bike ride today. While bike riding is just cross-training at this point, I should do it more often. Of course it is great exercise, but more importantly at this point, it is good for the soul.

It is funny, these days it is somehow easier to go for a run than go for a bike ride, even though the bike ride is much more fun. Part of it I suppose is that I "have" to go for a run three times a week. It is on the calendar, so it must be done. And the deadline in 56 days is all about running. The swimming and biking are part of the training of course, but not the focus, so it is easier to let them slide. And the other factor is that I am out of bike shape, so biking is tougher than running these days.

But I'm trying. I've been trying to find some enticing local routes to make it more tempting to get out there. It actually looks like San Diego is relatively bike friendly from what I've seen so far. There is a nicely detailed bike map put out by the county, and a number of signed bike routes around the city. Today's route was around Mission Bay and up the coast to Seal Beach. 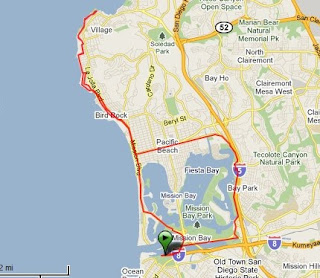 The weather was warm, but more pleasant by the coast. There was some wind to cool things down, as well as fight against the last few miles. It was a great ride. Seeing the city by bike is completely different. The route of course had some great water views, but just rolling through La Jolla and Mission Beach at bike speed was enjoyable.

As has become tradition lately, I went out for breakfast after my weekend workout. I tried a new place in Ocean Beach, and I found a breakfast I have only had one other time in my life. Banana Bread French Toast! Coincidentally, the one other time I had it was on another bike ride. 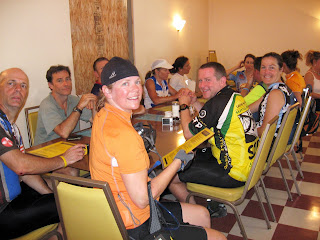 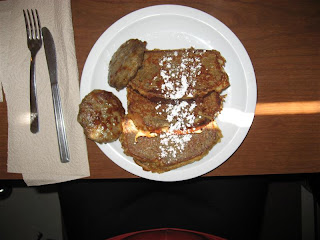 This was a great "Second Breakfast" stop on our way to Glacier National Park back in 2007. Each morning we would have bagels and coffee before leaving camp, but would often stop along the way for a more substantial meal. Our group basically took over this small diner, overwhelming the patient waitress. But we were in no hurry, and we even pitched in to brew and serve coffee.
It was one of the best days of riding, and the breakfast and company were both wonderful. Today's breakfast brought back fond memories, but in no way compared with the original.
Posted by Sean at Saturday, August 21, 2010

Awesome, I fondly remember that breakfast as well. I tried to make banana bread French toast several months ago, but it just wasn’t the same. Like you said, the company really made that breakfast special.