I heard several times that I had to see Grand Canyon at both sunrise and sunset. The look of the canyon can change dramatically depending on the angle of the sun, and the cliff walls really come to life when the sun is low on the horizon. I had already been at rim's edge as the day came to a close, and the plan was to get up before the sun breached the horizon the next day.

When considering where to stay, I had originally planned on staying in nearby Tusayan. The town is only about five miles from the park, and I had even toyed with riding my bike to and through the park. But the more I thought about it, I figured since I was only going to be there for around 24 hours, I might as well spend the extra $30 to stay within the park. It would mean less hassle, more time in the park, and of course a few extra minutes of sleep before meeting the sunrise.

I am really fortunate that I made that choice. Road construction near the entrance caused delays of up to 45 minutes, which would have been frustrating as I drove in and out of the park at the start and end of the day.

I was scheduled to run six miles on Thursday, and I thought running through Grand Canyon National Park at sunrise would be pretty spectacular. There is a paved and gravel trail along the rim of the canyon, connecting the village to many of the viewpoints and overlooks. It was about three quarters of a mile from my hotel to the rim trail. The alarm went off sometime around 5:00am after another short night of sleep, and I set out about a half hour before sunrise.

Before I even started, I threw out any thoughts of maintaining any training pace. Not only would I be stopping regularly to take in the view, but the park sits at about 7000 feet of elevation. I had previously biked at around 6500 feet, so I knew that living at sea level and exercising at 7000 feet would not be very comfortable. No, the goal of the day would be taking my time to savor the moment.

Here is a picture of the route I ran (click to enlarge): 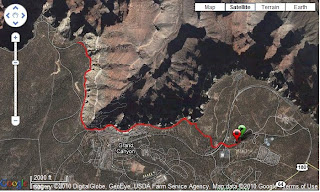 The first bit was a decent path through the park and the trees, but the show really began once I turned onto the rim trail. As you can see from the picture, for much of the time, the path is within tripping distance of the edge. The center of the picture where it says 'Grand Canyon' is where the restaurants and nicer hotels are. I was unsure how many people I would see along the path, so I lingered a while early on the rim trail before I reached 'civilization'.

When I reached the village, I found a number of people out to greet the sunrise, but it was in no way crowded. The sun was still below the horizon, but it was already light out. I paused in a number of spots, trying to decide on the best place to be at sunrise. I decided to run past the village and out toward the Hermit's Rest route I had traveled by bus the day before. I had intentionally skipped the first couple of viewpoints, figuring I would run to them in the morning.

In the above picture, the Hermit's Rest route begins where my red running route makes a right turn toward the top of the picture. I saw a sign as I entered this portion of the path that said something about a "worship center" 300 yards ahead. I hadn't heard mention of it before, and I didn't know what to expect, but I have to assume that this is what they were talking about. 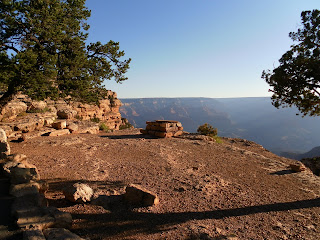 I also didn't have a picture in my head of the 'ideal' spot to watch the sunrise, but once I saw this, I knew I had found what I was looking for. There was no one else around, so this little platform would be my own private meditation spot. With a little timer assisted photography to capture the moment, this corner of the park was all my own as the new day began. 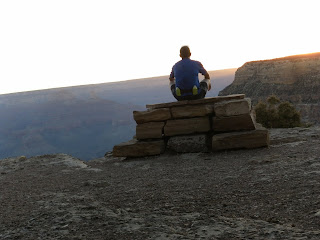 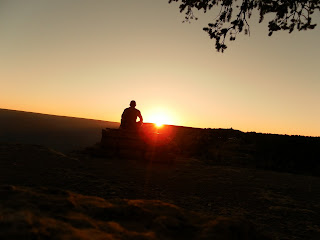 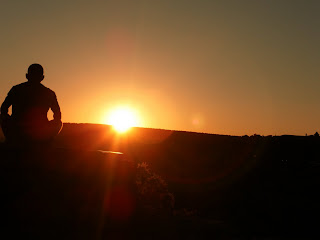 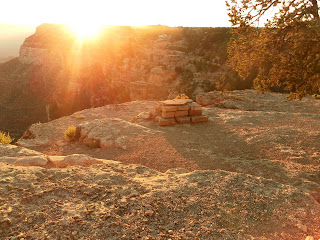 After watching the sunrise, I pressed on to Maricopa Point and the Trail Overlook viewpoints. Maricopa Point was my turnaround point, and the trail branched off to a lookout point that seemed suspended over the canyon. I met another runner there, and we both leaned on the rail and took in the dawn without a word spoken. I stopped by the Trail Overlook on the way back, and met another runner. He was more chatty and we talked about the Bright Angel Trail that snaked into the canyon below us.

You stare at a thing of beauty for too long, and it can become less spectacular. Spending several hours at various viewpoints the day before, my eyes began to glaze over and the incredible details began to fade a bit. I don't know if it was just stepping away for the evening, or if being out there nearly-alone on foot had something to do with it, but the canyon seemed new again, and I think I enjoyed it even more the second day.

I ran back to the hotel, getting in the required six miles marked on my training calendar. With the altitude, steep trail, and multiple stops to enjoy the view, it took about two hours to complete. But moving any faster through this glorious morning would have been a mistake.

I showered, grabbed a quick breakfast, checked out of the hotel and hit the road once again around 10:00am. I decided to leave the park from the east exit, and stopped at a couple more viewpoints along the way. Once again, it was beautiful, but the magic was beginning to slip away (again). This part of the canyon was different and beautiful in its own way, but I didn't linger quite as long. It was time to move on.

Below are some of the photos from the second day, both during the run and on the drive out.

Now it was on to the Phoenix area, and some time spent with friends I hadn't seen in a year. Out of the woods and back to civilization.
Posted by Sean at Tuesday, August 31, 2010

Seriously awesome that you actually did this!!