Beating the heat with a summer read

This ebook thing may have finally grabbed a foothold/reached a tipping point/exploded onto the market (or whatever buzz-phrase you want to use).

There was a story last month that ebooks are now outselling hardcover books at Amazon. And not just barely, but by 50% to 80%. I am sure there are many reasons why the ebook is finally being accepted on a larger scale by the reading public, but a big part of it is price. Typical prices of the electronic versions of books run about $10, whereas the hardcover version is usually around $25.

But the biggest barrier has always been the price of the reading device itself. The Kindle originally sold for around $360, a price a casual reader was unwilling to pay. The Kindle started as a niche product sold to readers that spend more on books than on cable tv, and to people that travel on a regular basis since you can carry hundreds (now thousands) of books in a small package. No matter how well the electronic reader simulated or enhanced the experience of reading a hardcover book, only a small part of the market was willing to spend that kind of money on a new gadget.

But the price of the Kindle has been dropping over the past year or two, first to around $260 and more recently to about $190 as more electronic readers entered the market. Amazon saw a dramatic increase in sales once they priced it below $200, even though the iPad was released around the same time.

Amazon has recently released the third version of the Kindle

, which will begin shipping early next month. It is smaller, faster, holds more books, has a better screen and longer lasting battery. The $189 version

now has both 3G cell service and WiFi to download books, and there is also a $139 version

if you only need WiFi to shop for books. Now that an improved version is selling for almost two-thirds less than the original, it will be interesting to see if there is an even larger leap forward in the adoption of electronic readers and books.

Some are predicting the demise of the paper version of books in the not too distant future, but I think this is pretty unlikely. Some folks will always prefer the paper version, and there are still benefits over the electronic version, like being able to lend a book to a friend. I still read more paper books than Kindle versions at this point. Part of it is a backlog of books I have already bought, and the desire to save money by picking up books at the library. I currently have three books ready for me at the library, so I need to get cracking.

However, right now I wished I had a Kindle book to read. One of the unadvertised benefits to a Kindle book was discovered recently by my roomie. You can slip the Kindle into a ziplock bag and read it while being cooled by the water misters we bought to beat the heat. Try that with a paperback. 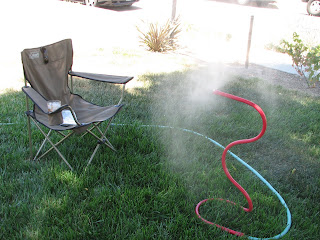 It is currently 90 degrees, and that is inside the house.
Posted by Sean at Wednesday, August 18, 2010