Where the wild things are

On Sunday the troop headed to the San Diego Wild Animal Park. It was Holly's birthday, as well as the last day of the annual butterfly exhibit, and who wouldn't want to invite butterflies to your birthday.

The park is enormous, covering over a thousand acres. There are more typical zoo exhibits as well as vast open enclosures where the giraffes and antelopes can play. There is a guided tram that takes you through the open area, and gives you a semi-close-up look at the roaming wildlife. In addition, there are several walking trails that take you to see other animals like the lions, tigers and elephants.

As you walk into the park, you immediately notice the extensive variety of birds in the park, most free to fly wherever they wish. Some belong there, but others just come to hang out in this little inland paradise. There were plenty of cool birds, but I don't think any can top the looks of this one. 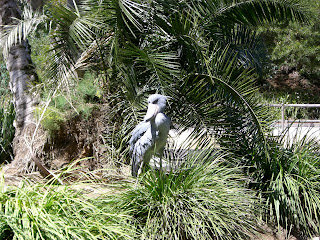 It seems prehistoric, cartoonish, and even a little Muppet-like at the same time. If I remember correctly, it is a Shoe Bill Stork.

The park is so large that it would be difficult to cover it in one day. It is run by the same folks as the San Diego Zoo, so I invested in an annual pass so I can visit each one throughout the year. Now I don't have to try to see it all in one visit. I can just drop in and see the pandas on a lunch hour.

But on to the butterflies. They are in a building similar to an aviary, and dozens of varieties fly around you as you walk through. It was of course difficult to capture a picture that would do them justice, and my camera was really misfiring by the time we got there. I did capture a little video on my still camera. Again, it doesn't do it justice, but you get the idea.


The line was the longest for the butterfly exhibit. Taking a tip from Disneyland, there was some entertainment to distract you while you waited. When you were almost to the entrance, there was a guy handing out crickets and meal worms. To eat. Matt and I took the plunge. Kind of salty in case your wondering.

After the butterfly exhibit, we went into the Loriket aviary. There you could get a little cup of nectar, and the birds would land on your arm to drink from the cup in your hand. We were there near the end of the day, so the birds were a little full, but they eventually came down to drink. 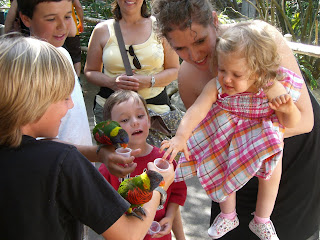