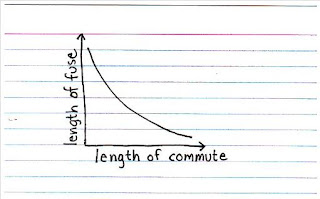 courtesy of Indexed
Oh man, the week is finally over. It was another long one, working too far from home. On average, I am away from the house from about 7:00am to 9:00pm, and that adds up to very little down time during the week. I'd like to think that I have the ability to endure, and to do the same job under strain, but I know that isn't as true as it once was. With the lack of sleep and downtime, my mind has been scrambled lately and I have been more on edge.

When I get home, I have so much to do but no clear head to deal with it. I have ideas that I would like to get out of my head and down on paper, but I know it would come out even more jibberish-like than normal. I haven't read a page in a book in two weeks - I just don't seem to have the mental space to fit it in. Bills have been paid, taxes have been sent off, the dog has been taken care of, but not much else has made the cut lately. I try to get to e-mails, but anything needing more than a glance is put on the 'to do later' list (which is what the weekend will be about). The fact that the laptop is slower than a hand-crank calculator isn't helping, but that is another story.

I hope to have something besides woe-is-me B.S. up soon, but I need a seriously long nap. Too bad the dog is an early riser.
Posted by Sean at Friday, April 16, 2010