All of my electronics are turning on me. My phone and my camera have been giving me problems, but the most irritating has been my laptop computer. I've had it for a little over four years, so I suppose in this era it is a dinosaur. I wiped it clean and did a fresh reinstall of Windows last fall, and it helped some, but it became increasingly slow and unstable. I had no interest in replacing it, but it was time.

As an example, after a fresh boot and nothing else open, it took seven minutes for iTunes to open. And the program wasn't functioning for another few minutes after that. It brought me back to the time of AOL and dialup. Like back then, I got in the habit of doing chores while I waited for programs to open. Click an icon, make a sandwich. In the past few weeks when I had so little time at home to just check e-mail, it was exceptionally frustrating, so I started looking for a replacement.

I had dragged my destop computer down with the move, so that was an option. It just needed a monitor, so I picked up the cheapest one at Fry's Electronics. As a side note, the cheapest monitor was a 20" LCD flatscreen, which was a vast improvement on the huge CRT I donated to the Goodwill, so no complaints there.

But I really liked the mobility of a laptop. My old laptop was a near necessity when I was working in real estate. Back then, I decided to get a large screen version for ease of use and for presentations to clients. I didn't skimp on the processor either, but of course by now it is outdated. But it ended up being rather heavy and cumbersome, so this time I looked into the newer, smaller (and cheaper) netbooks.

Since I have the desktop to do the heavy lifting, I didn't need (or want to spend money on) a top of the line model. The netbook would largely be for e-mail, writing and surfing, so portability was the main concern. I found a Gateway model on sale for $280. It is crazy, but that is less than I paid for my smartphone three years ago. The smaller keyboard and screen are a bit of an adjustment, but quite frankly I am just so happy programs open in under a minute that I am willing to be pretty forgiving right now.

So, much of the weekend was spent backing things up and moving files around. Just like a physical move, it is a pain in the butt, but it is a chance to downsize and organize. I am going to try to avoid gumming up the netbook with too much stuff. I will be keeping most of my pictures and music on the desktop, as well as all those archived e-mails I can't seem to clean out. I am also testing out Google's Chrome browser as it is supposed to run faster and cleaner than Firefox and Internet Explorer. Smaller, leaner, faster!

There was a brief temptation to jump ship to Apple. An iPad would be a pretty cool way to go, but their base model was twice the cost of the netbook, and I just can't see giving up the keyboard just yet. Apple doesn't make a netbook, and their cheapest laptop is a thousand dollars, so I am still a PC.

I haven't moved or figured everything out yet, but I am at least back up and running (and not swearing at the computer screen anymore). 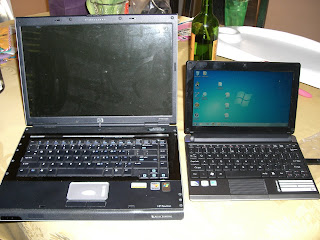 Email ThisBlogThis!Share to TwitterShare to FacebookShare to Pinterest
Labels: computer