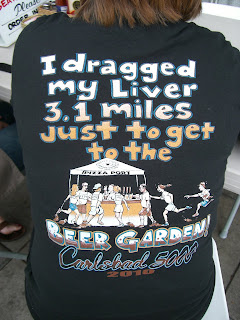 The beer garden isn't the only reason we run, but it is a nice reward for the effort. Most of the events of any size will have a beer garden near the finish line - they recognize a captive audience when they see one. Though runners tend to be disciplined folk, we are happy to turn our backs on counting calories on race day. And beer has that magical combination of water, carbs and celebration. Great for recovery.

We spent some time hanging out in the beer garden at the Carlsbad 5k a couple weekends ago. Because the race is divided up into gender and age groups, we were at the race for several hours. Sean and I were in the first race, and were enjoying a celebratory beer a few hours before Marci would tow the line. One of the great things about these running and biking events is the variety of people who participate. There are so many great stories behind those bib numbers. And the two places you are likely to find out about them are during the nervous chatter at the start line, and in the beer garden afterwards.

Sean saw one of his customers, Mr. Reed, at the Carlsbad beer garden. Mr. Reed has run more marathons than he choses to keep track of, and he told us stories about the Catalina Island Marathon mentioned at the finish village, as well as his favorite marathon, the Great Wall of China Marathon. Both are grueling courses, and it sounds like the Great Wall one included a ton of stair climbing.

This year's event was the 25th anniversary running of the Carlsbad 5k, and there was an 80's theme to the website and shirts. Even a local got in the spirit by blasting Asia's "Heat of the Moment" at 7:15am on his 4' stereo speakers around mile 1. (I totally dug that CD out of a box and listened to it last week. Totally). Mr. Reed mentioned that he has run in each of the 25 Carlsbad 5k events. I found out later that there are only 17 people who have done this. Sean commented to Mr. Reed that he was in a different age bracket when he started, and didn't used to have to get up so early. But Mr. Reed corrected him - he was around 43 when he started, and is still running the event at 68.

It is hard to imagine running an event 25 years in a row, and only starting when you are 43. But that is about where I am these days. I hope I am still standing at the start line when I am 68. And sharing great stories in the beer garden afterward.

Cheers back at ya, and I hope to be standing in the same beer gardens with you and the rest of the running gang. We will tell stories of when we were young. The youngins will want to be just like us some day, huh? Yes, I think so.......