"Wine is sunlight, held together by water."

~ from the movie "Bottle Shock"

is based on the true story of the 1976 contest between French and California wines. California's Napa Valley was still the young upstart in those days, and was not taken seriously by the wine connoisseurs of the day. An Englishman with a wine shop in Paris proposed a blind taste test pitting the California wines against their more respected French counterparts. You may see the results coming down 5th Avenue, but the movie is quite enjoyable.

We watched the movie for the second time last night. Naturally, a bottle of wine seemed appropriate. The cupboard was bare of wine, but I had brought a single bottle down with me on my move from Seattle. It is a bottle that I had tasted once before in my own little contest.

My friend Scott had a watch that he never wore, and during a party at his home, we noticed it sitting on the counter in his kitchen. It was a Swiss Army watch with the logo of a restaurant we all had worked at, the place where we all met. Brian and I both admired it, and Scott was willing to give it to one of us. But who? I don't recall whose idea it was, but we decided that Brian and I should each bring a bottle of red wine to the next party. Whoever brought the nicest bottle would win the watch. It would be a blind taste test, so it was not the nicest by price, but by taste.

Well, Brian forgot about the contest, so I ended up winning by default. The bottle I had chosen was one I had never tried before, so we all enjoyed a glass for the first time. And it was good. I quickly returned to purchase another bottle, and I have been holding on to it ever since. Stashing it away for a special occasion.

That "special occasion" never happened, so the bottle has been sitting on my shelf for a few years. So tonight, we had our own Open That Bottle Night:


...the time when you are entitled to uncork that cherished bottle and enjoy the contents. The bottle that you enjoy, traditionally, is one that you have been saving for some special event that, so far, has never quite happened.

Thankfully, the bottle had not suffered much from inadequate storage, or enduring the particularly hot summer last year. You never really know until you open the bottle if it was worth saving all that time. I don't know what exactly I was saving it for, but last night felt like the moment to open it.

So, I raise a toast to all of my wonderful friends. I have always cherished you greatly, but never more so than this past year and a half. I wish you all could have been there to taste just a bit of it. It held its own over time, just like your friendship. 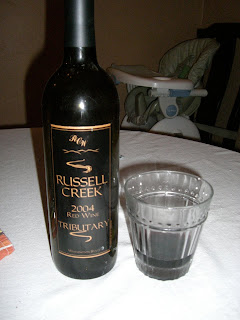 Thanks for sharing Buddy. It ended up being a special occasion in my opinion. Really nice.

Always hard to know if it was the wine or the company that made it so good. in this case, I think it was both!

Tonight I shall toast to you, as I am meeting with a dear friend of mine at "Rumours" - a local wine bar, and we haven't seen each other in a year. After reading your story, I'm looking forward even more to this evening!!

Oddly, I bought the Russell Creek for my restaraunt without remembering that it was the wine we tasted that night. Well done Sean. Cheers!