Our back fence finally blew down a couple of weeks ago. 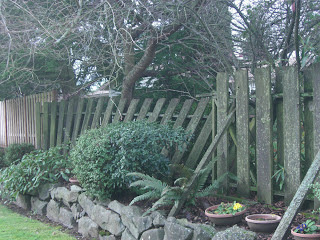 The fence was pretty rotted and was mostly being held up by our rhododendrons. My neighbor to south had replaced his back fence last year, and the new fence covered about a third of the property line for my backyard neighbor. I was out mowing my lawn before work began and started chatting with my backyard neighbors over our rotted fence. We hadn't really met previously and I had a nice chat with the two older ladies.

We started talking about the fence and she told me what they were paying to have it built. I told them I could do it for much cheaper, and that once it was built I would build one between our houses. When I saw the fence they built, I was pretty bummed as it was kinda ugly, so I kinda lost interest in replacing our fence. But then it blew down.

We talked again and agreed to split the cost. Nice and friendly. I tore the fence down yesterday. The ladies were out trying to help me at every turn (they're in their 70's by the way). I told them I was fine on my own, but they were out there trying to pitch in. I found lots of old concrete when I was digging the holes so that slowed me down.

Today was the day for concrete and posts. Then this happened: 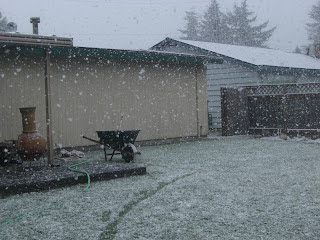 I knew snow was forecasted, but the next couple of days called for heavy rain and I thought that would be even worse for getting the concrete to set. Plus, it only snows half the time they forecast it. Fortunately I had some help... 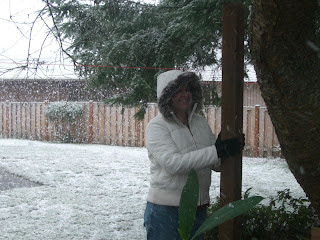