The course has finally been announced for the June 27th marathon. I had heard that they were having difficulty getting the full marathon course approved by the city. It sounds like an event of this size typically takes over a year to put together, and the Rock n Roll event was only announced in August of last year. From the rumors I heard, they were trying to get the course over to either West Seattle or the Greenlake areas. The course they ended up with is a little disappointing and I am hoping it was a compromise due to the time pressure.

The first part of the course is the same for both the half and full marathons. It travels north from Fosters Golf Links in Renton, and after about 4 1/2 miles reaches the shores of Lake Washington. The next five miles travel along the lake's edge, and should be the highlight of the run. The route then climbs up the hill toward downtown, and the half marathoners finish somewhere near Qwest Field.

The disappointing part is the next 13.1 miles for the marathoners. It looks like we will be running a double out and back on highway 99. This does include the Alaskan Way Viaduct which provides an elevated panoramic view of the water, but it doesn't quite make up for the fact that we will be running along an industrial highway. Add in the fact that the course doubles back twice, and it means we are in for some monotony. (And yes I understand some may think it is ironic to complain about monotony when talking about running 26 miles).

I am hoping this route was their fallback option, and that they are already working on a route that travels a more interesting road for next year. I really hope they come up with more of a loop route and get rid of the out and backs along the highway. I still think it will be a great event this year. The Rock n Roll marathons put on a great show, are well run, and will hopefully bring in some much needed tourist dollars.

Below are pics of the course and elevations, and more information can be found here. 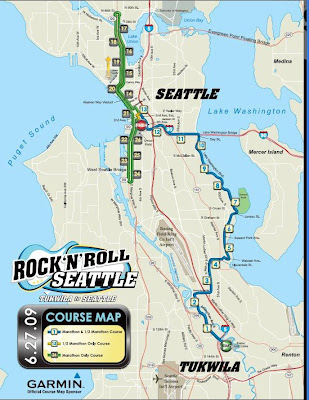 That Alaska Way Viaduct and the Aurora Bridge.....just the perfect venue for someone that is so afraid of heights. Yikes!