I am watching coverage of the Tour of California bike race tonight. It is a nine day bicycle race running up and down the hills and coast, and is the largest event in the United States. Of course the biggest events are over in Europe, as are most of the major teams. The U.S. presence is getting bigger in the sport, and the Tour of California is kind of the kick off to the season. I enjoy watching the big tours, and seeing the pro tour riding in front of the backdrop of the California coast is a beautiful thing.

Our own season kick off event is the Chilly Hilly, which is this Sunday. It is only a one day event of 33 miles, but the hills make up for its brevity. The event is a tough start for those of us who are more weekend warrior than competitive cyclist. I have been out on my bike six times this year so far, which is five more than last year at this point, so that's a good sign.

I mentioned that I have started joining the Sunday morning running group at Running in Motion. They also have a Saturday morning bike ride that I tried last weekend. There were seven or so riders, and after a couple miles we fell into a paceline. For non-bikers, a paceline is a string of bikers riding closely together, one behind another. The front biker sets the pace, and all those behind get the benefit of riding in a wind shadow. With someone in front of you blocking the wind, you are able to ride at higher speeds with less effort. On the pro tour, rather than a paceline, it is a mass of bicyclists riding wheel to wheel, shoulder to shoulder in a fluid group called the peloton. It is an amazing thing to watch. 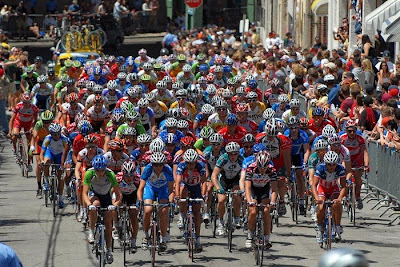 I have done very little paceline riding. We had a great paceline when we were racing to beat the deadline as we rode out of Glacier National Park. The road was closing at 4:00, and we had been dragging our feet all day to get in as much time in the park as possible. It was a lot of fun to crank up the pace as a group and we made it in just under the wire.

I have always heard about the benefit of riding in a paceline - riders can realize a 30% energy savings by tucking in - but I really haven't done it enough to make my own judgment. On Saturday, we were cruising along at about 19 mph. When it was my turn to take the lead, I decided to watch my heart rate. Though it didn't feel like I was struggling to maintain the pace, my heart rate jumped about 20-25 beats per minute compared to when I was following.

I have resisted riding in pacelines in the past. I'd rather enjoy the scenery than blow through the day looking at the rider in front of me. I do have some longer rides planned this year though, so a paceline may become a little more tempting. The lesson of course is that it pays to have the support of friends around you rather than trying to do it all on your own.
Posted by Sean at Wednesday, February 18, 2009