There is a wonderful entry over on Sean's blog regarding the Declaration of Independence and the history of the 4th of July.

I rolled out of bed early this morning to volunteer at a local 4th of July 5k. Originally I was supposed to help register runners, but at the last minute they needed me out on the course. I was stationed on Main Street just before the last turn to the finish line. My job was simply to make sure they made the turn and that the spectators stayed out of the way.

Main Street was lined with lawn chairs in preparation for the holiday parade. 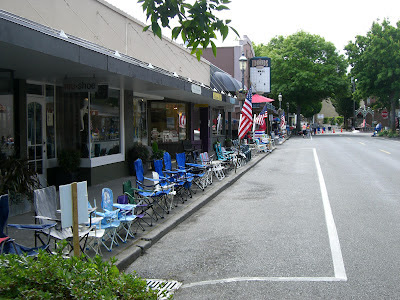 The parade wasn't going to start for another hour and a half, but people got up early to stake their claim. The 5k started at a local park, and there were several families there at 8:00 am to secure a good picnicking area for their 4th of July celebration. Holiday fun takes planning, dedication and some early risers.

A little later as people started to filter in for the parade, this gentleman passed by handing out mini flags. 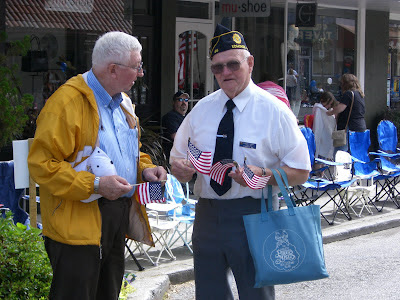 He was all smiles and clearly proud to be there. There were a few other veterans in uniform or with a cap emblazoned with their ship or unit. I also met Sol and George: 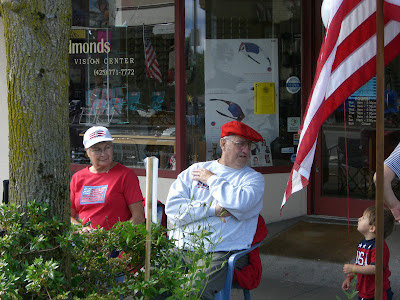 I had a chance to talk to George while waiting for the runners to arrive. He and his wife have been coming to the parade for about 20 years. They both worked for the police department in some capacity, and he chatted with officers and the mayor as they passed by. When people had questions about the parade, and they came to me since I had an official orange vest on, he was happy to help them out.

A wonderful start to the holiday. Happy 4th of July everyone!
Posted by Sean at Friday, July 04, 2008

Sean, you're a helluva guy.