Tami and I volunteered this year. We were course marshalls around mile 18 (mile 5 for the half). Basically we were given a slow/stop sign to prevent cars from running over the runners. Last year I volunteered at the finish line and the weather was awful. Endless rain and even snow in some locations. This year was chilly but beautiful. 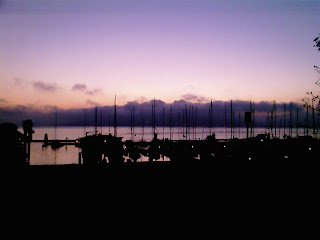 As is true with most marathons, there were many more people running the half marathon. They were the first to come by, and for a while they packed both lanes of the road. They were followed by the walkers and they just finished passing before the full marathon runners came by. The first two marathoners were neck and neck and had a 7 minute lead on everyone else. Uli Steidl has won the last 7 or 8 marathons, but skipped this one to run an ultra next weekend. His wife kept the family tradition alive by winning the women's marathon.

I appreciate all that volunteers do for these events, and it was nice being on the other side of the tape this time around. Outside of occasionally directing traffic, we spent most of our time cheering the runners on. I tried every motivational thing I could think of to help them along. Mile 18 is a tough place to be. Those that had their names on their shirts of course got a personal cheer. I was surprised about how many walkers there were. That makes for a really long day. 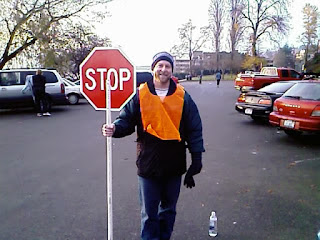 I didn't let the power of the orange vest go to my head.