I forgot to mention that when the last marathon walker was about to pass, this guy came rolling by on his bike: 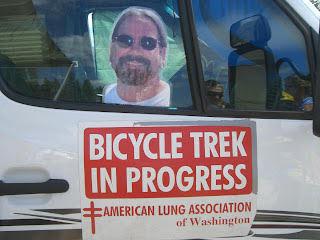 I met Bruce on the Big Ride Pacific Coast in 2006. Great guy and a lot of fun to be around. He has done a number of these Lung Association rides, and he was very welcoming to us newbies. He was unable to make it to the Glacier ride this year, so his good friend Scott laminated a photo of him and carried him along the whole ride. "Bruce" showed up in lots of our pictures. A poor substitute for the real thing so it was nice to see him Sunday. He was working as a sweeper for the marathon, keeping an eye on the stragglers and radioing in their position. Always there to support the team.
Posted by Sean at Tuesday, November 27, 2007