So I ventured out into the cold this morning to try and snag a couple of bargains. This is only my second time participating in the madness. A couple of years ago I bought a suit at a screaming deal that was only available for a couple of hours.

I was actually expecting it as I had caught the news last night. They covered our local mall as it was opening to shoppers at midnight. Live bands, lots of mayhem. They stopped by Best Buy (where I was headed) and found people had been camping out since 7am Thanksgiving morning. Different levels of crazy. When I drove by, there was no chance of even getting in the parking lot.

The first backup choice was Circuit City, but the line was wrapped around the building. On to third choice of Office Depot. They didn't open until 6:00 and when I pulled up outside there were only two people in line. Yes! A quick stop at the gas station for coffee and pastries, and when I got back more people had climbed out of their warm cars, so I was around 10th in line. No problem. I was there to buy a printer/scanner/copier/toaster/waffle-maker combo for $85. Most were there for the few cheap laptops and flatscreens in stock. The guy next to me was calling a partner at another place to coordinate their effort. I'm a total novice. 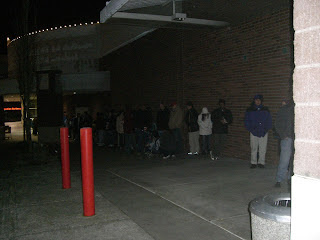 After that it was onto buy a cheap air compressor. No lines outside the store this time, but a huge line inside. I actually lucked out by getting in a newer line that joined the original line. Some people had been in the checkout line for an hour and a half to two hours. Only 30 minutes for me. 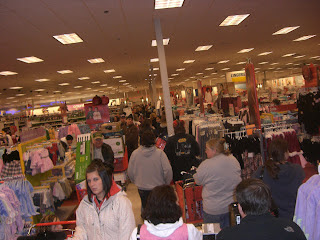 So other than the early hour and the chilly weather, not too painful. I know some people do this every year, but it will need to be something pretty compelling (and offered in multiple places) to drag me out again.
Posted by Sean at Friday, November 23, 2007

I think I'd rather pay more...Yikes!