The e-book is here to stay

Yes, it's finally happened. The digital book has overtaken the paper book on Amazon.com. And this time that isn't only true about hardcover books. Now we're talking paperbacks.

In reporting its latest earnings, Amazon said that it was selling more Kindle books than paperback books, though the score is still close. Since January 1, for every 100 paperback books Amazon sold, 115 Kindle books were sold. To top it off, the company says that since the beginning of the year it's sold three times as many Kindle books as hardcover books.

When I heard that e-books were outselling hardbacks, I wasn't that surprised considering the economy. A$25 dollar book is a tougher sell these days. But I did not expect e-books to bypass paperbacks anytime soon. I figured the e-book, though growing in popularity, was still a niche item.

. It is interesting to see the author's change of perspective as time passes. He is a traditionally published author with several books in hardback and paperback. In his earlier posts, he discourages authors from self-publishing and dismisses e-books. As the Kindle and other e-readers gain in popularity, his tune changes. He has released several earlier books (previously rejected by brick-and-mortar publishers) exclusively for the Kindle. Many are outselling his traditionally published works. From what he can tell, the primary (only?) reason is price point.

He has no control over the pricing of the books under contract with his publisher. This is true of both the paper and electronic versions. The paperbacks are generally $7.99 and the Kindle versions are around $4.70. The ones he has control over vary in price from $.99 to $2.99. He has found that the e-books at the lower price not only sell more items, but actually produce more total revenue than the higher priced ones set by his publisher.

I have been reading up on this because I am considering releasing my novel as an e-book and maybe even a paperback. The jury (of one) is still out whether it is worth releasing on the world, but I did finish the first round of revisions yesterday. I have no real expectations, but it would be pretty cool if I could sell a few copies.

I was also an early nay-sayer on the e-book. I thought the tangible experience of reading a paper book was something that couldn't easily be replaced. But I love my Kindle. I don't think the paper book will ever disappear, but it appears the e-book has finally found a toehold in the market.

I have been getting my newspaper delivered to the Kindle for about two years now. It does not replace the physical newspaper as well as it does paperbacks, but it is still a good product. I did wake up to this though this morning: 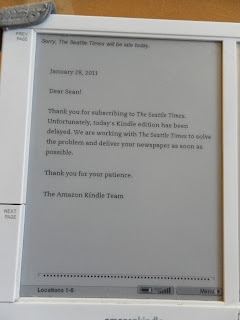 This is the first time the "paper" has been late, and it actually showed up about 15 minutes later. I don't think any paperboy could boast only one late paper every two years. And of course it is never soaked with rain.
Posted by Sean at Friday, January 28, 2011

I will pay full price for your book, whatever the format!

But you can't autograph my iPad.

Although I'm one for technology, delivery of the newspaper to the Kindle keeps my 13-year-old from getting a paper route and working for his money like I did when I was 12. Thus, raising a generation filled with self indulgent kids who are growing more and more with this sense of entitlement of goods, without wanting to pay for them, that we never had.

I miss the physical newspaper and lament its continuing slide, but I'm not sure the Kindle has much of a hand in it. As popular as e-books have become, I doubt the newspaper has had a similarly popular switch to a Kindle version. It just isn't as good.

Unfortunately, the newspaper first faltered when Craigslist killed their income from classifieds, and now it competes against CNN, MSNBC and Fox News for "viewers" with short attention spans. I hope newspapers figure out a new way to survive, both for the readers and of course the paper route.