Every one of these marathons is a little different from the rest, and this was no exception. But it was also a bit of a flashback as well.

I would be running with Sean and Marci, just like I did at my first marathon finish. I spent the night at their house before the marathon, and we enjoyed a great pasta dinner while excitedly/nervously talking about the race the next day. I ran the whole way with Marci during my first finish, and I would be running alongside Sean the next day. I was really looking forward to the day, regardless of how it went.

I actually had a decent night's sleep before this marathon (about 6 1/2 hours). Where I usually toss and turn for an hour or two, I was able to read myself to sleep this time. Unfortunately, my alarm did not go off, so that extra half hour of sleep sent me scrambling around to get ready in time. We reached the start line a little late, but we did not have to fight the crowds like we normally do. The 1,500 marathoners took off an hour and a half before 8,500 people running the half, so there were no lines at the bag drop or the porta-potties.

We queued up in the starting chute about five minute before the gun and did our last minute stretching while the Star Spangled Banner rang out in the darkness. The race started at 6:00am, 50 minute before sunrise, so the start line seemed a bit more subdued than most. The three of us ran together for about the first mile, before we wished Marci a great race and Sean and I took off together.

After mile 2, the course joined highway 101. A nearly full moon shone as a beacon before the sky slowly brightened in shades of orange and pink. After passing through the small downtown area, we were out on the coast and the sounds of crashing waves drowned out the shoe strikes and heavy breathing of the runners. There was a high surf warning and a number of surfers were taking advantage of the large waves. At mile five we turned inland for a long grind of a climb that ended around mile 9. There were rolling hills along the coast, but this would be the big test of the day. We held a pretty steady pace and crested the hill with an average speed 3 seconds per mile faster than goal.

Right around mile 8, we saw our great support crew. It is a lot of work to support runners along a marathon route. Beyond the logistics of trying to catch several runners at different points of the course, this one included a very early wake up call to make the hour-long drive to the course. Along with Matt, Holly and Annabelle, our friend Kristy was a surprise guest to cheer us on. It is hard to describe what it means to see a friendly face along a marathon course, but when it is a complete surprise it gives you that much more of a boost. 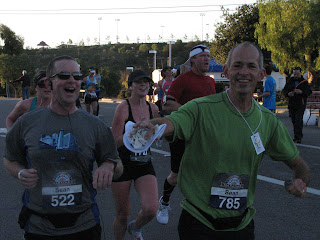 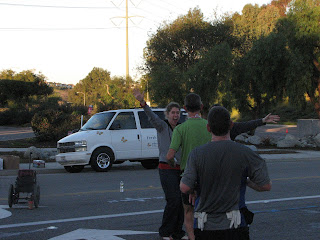 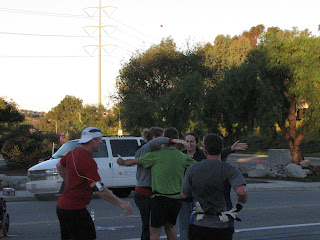 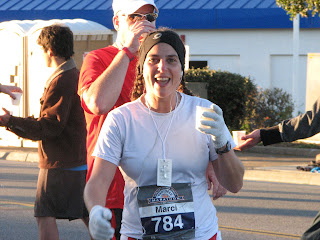 After reaching the top of the hill, Sean and I upped the pace to put some time in the bank. Our support crew had crossed the street and cheered us on again while we were flying downhill. After another quick out-and-back, we rejoined the Coast Highway at mile 15. We also joined the half marathoners who had started an hour and a half after us. The runners that joined us were at about the 5 mile mark of their race, and they were flying by us. It was a little discouraging, but we tried to resist the temptation to keep up. They turned around a mile later, and the marathoners were by themselves again.

We headed south along the coast until the turnaround at the 18 mile mark. There was a short, but very steep hill at the turnaround, and it was pretty brutal on our tired legs. Looking over our time splits, it looks like we had built up almost six minutes in the bank to beat my last PR, but this is where we started to slow down.

We saw our support crew again at around miles 17 and 19. They did a great job of using the out-and-back portions of the route to see us twice by just crossing the street. We were still in good spirits by then, but their cheers really gave us a boost.

The out-and-backs were also great for us because we spotted Marci twice along the course.

After the turnaround, we had about six miles along to coast before turning inland for the two miles to the finish. We were both slowing down a bit, but not crashing at this point. There were a number of spectators along the Coast Highway to help us along. All of the runner's bibs had their names on them to help the spectators cheer us on, and several laughed as they shouted, "Go Sean! And the other Sean!"

At around the 20 mile mark, I felt a rock in my shoe. I first tried to ignore it, and then get it to move by shaking and flexing my shoe, but I finally had to pull over. I took off my shoe but could not find anything. I still felt it but did not want to stop again. I wasted a few more seconds stopping to loosen the laces, and then to retie them when they came loose. Not long after the fruitless search for the phantom rock, my IT band grew tight and my right knee began to hurt. I haven't had IT issues for a number of marathons, but would struggle against it for the last four or five miles in Carlsbad.

We rejoined the half marathoners again, and now we were running with people slower than us. The road was nicely roped off for a while, but eventually we had to dodge and weave around the slower runners. We were slowing down ourselves, so eventually it became less of a problem. The road had several rolling hills, and it became difficult to maintain a steady pace. We walked for the first time on a hill around mile 23, and Sean said "don't let me hold you back" for the second time. We had agreed ahead of time that if one of us was feeling stronger at the end, we wanted them to press on. When we reached the top of the hill, I was actually feeling pretty good after the walk break, so I took off on my own.

I ran on ahead, passing a few runners along the way, but after about a half mile that small burst of energy disappeared. I would struggle along for the last three miles, walking up portions of each hill that remained. The last mile included a short downhill and then a flat portion to the finish, so I was able to increase my pace to a stronger shuffle. I actually ran right at my goal pace for the last .2 miles to the finish line, so that felt pretty good. Matt, Holly and Kristy were just shy of the finish line, but we missed seeing each other. I was running on the opposite side of the road, and they had been looking for Sean's bright green shirt instead of my bland gray one.

I crossed the finish line in 3:52:13, a PR of just over a minute. Sean recovered from hitting his wall and then a bout of leg cramps to finish strong just 45 seconds behind me. Marci, after worrying that she would not finish because of painful knees, shaved more than two minutes off her own PR and finished in 4:24:53. The Carlsbad course was more hilly than Long Beach, and I was also a little less diligent about my training this time around. I said I would be happy to shave off a single second off my Long Beach time, so I am pretty happy to have shaved off 1:09.

About the only thing I could complain about was the lack of a beer garden at the finish (especially since this was my one drinking day of the month), but Sean and Marci hosted a wonderful BBQ back at their house. We swapped stories in the sun and enjoyed bottles of Sean's home-brewed beer.

It was another difficult but beautiful day. The weather was about perfect and the course along the ocean was gorgeous. I can't thank our support crew enough. It sounds like they had a pretty fun day, cheering on strangers while waiting for us to come by. Even Annabelle got into the action, waving her hands in the air and saying "WooHoo" just like everyone else. And it was great to spend the two days with Sean and Marci. Marci pushed me along to my first marathon finish, and now Sean has pushed me along to a new personal best. 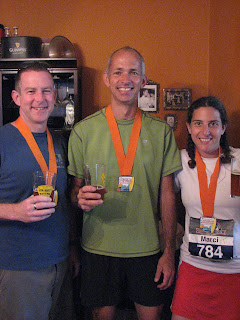 Congrats on the PR! We had a great day. The beer was good too!

"There's nothing quite like the dark silhouette of a palm tree at sunrise."