I saw something the other day that reminded me of a scene from So Long, and Thanks for All the Fish

by Douglas Adams. The scene:

One day, after coming across a set of detailed instructions on a set of toothpicks, John Watson, distressed and fearing for the world's sanity, built The Asylum to put it in and help it get better.


"It seemed to me that any civilization that had so far lost its head as to need to include a set of detailed instructions for use in a package of toothpicks, was no longer a civilization in which I could live and stay sane."

His asylum was basically an inside-out house. He lived on the outside (inside) with his wife because they were sane. The rest of the world lived on the inside (outside) because they were not. He pitched tent on a beach in California and built four walls around himself. He then decorated his side of the walls to look like the outside of a house, complete with front door leading back in to the outside world. He named the house "The Asylum" and he continued to live blissfully on the one patch of the world outside of it.

And in case his resolve should ever weaken, he had a plaque placed above the door of The Asylum engraved with the words which had driven him out...

Hold stick near center of its length.
Moisten pointed end in mouth.
Insert in tooth space, blunt end next to gum.
Use gentle in-and-out motion.

What I saw was a similar indication that something has gone entirely sideways. I received this free packet of peaches at the finish line of the Carlsbad Marathon. 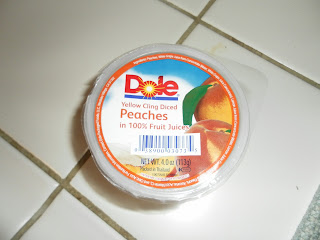 Nothing too weird here. Peaches packed in white grape and lemon juices, produced by Dole of Westlake Village, CA. Then I happened to look at the side of the package. 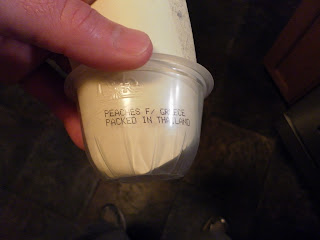 The peaches are from Greece, and they were packaged in Thailand before being shipped here to California. At minimum, this 4oz packet of peaches traveled 13,200 miles to be given to me for free. Of course they are not free in any real sense when you consider all the pollution it took to grow, manufacture and ship this tiny carton halfway around the world.

Anyway, it boggles my little mind that, even discounting the environmental costs, that this is the best or cheapest way to get food to our table. And if you're going to give away food, you could probably find more deserving people, less than 13,000 miles away.