Summer arrived a day late here in Seattle, and not a moment too soon. An article in the Times this morning indicated that Sunday was the darkest June day in at least 15 years, and it has been 271 days (and counting) since the temperature has cracked the 75 degree mark, breaking the previous record of 254 days. It doesn't look like it will get over the 75 degree mark today, but it is a warm, sunny day. Not quite summer heat, but at least it feels like spring.

I went for a run at Alki Beach out in West Seattle yesterday afternoon. There is a nice path along Puget Sound with sweeping views of the ocean as well as downtown Seattle. It is typically filled with runners, bikers, rollerbladers, kids and dogs, especially as the rain gives way to the sun. 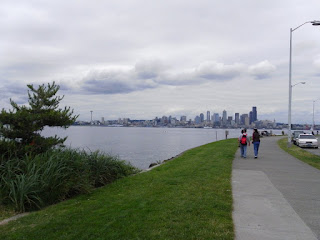 It was a bit quiet for the first day of summer, but there were still a number of people able to get outside in the middle of the afternoon. It was generally overcast, but the sun broke free for about a half an hour during my run. A run along the ocean was just the tonic I needed, but I wasn't having nearly as much fun as this pooch in the video I caught on my iPod.

He didn't seem to care that it wasn't yet swimming weather.

Another article that showed up in my inbox around the first day of summer was appropriately about sunscreen. An excerpt:

For the second time this month, Senator Chuck Schumer (D-NY) is sounding alarms about sunscreen. Last Friday, the senator stood with parents and a scientist from the nonprofit Consumers Union and called upon the Food and Drug Administration (FDA) to regulate sunscreens more tightly, after reviewing evidence that a common sunscreen ingredient could be a culprit in promoting, rather than protecting against, certain types of skin cancer.

The ingredient at issue is retinyl palmitate, a derivative of vitamin A added to a wide variety of sunscreens and other personal-care products to enhance your skin's appearance. But its use in sunscreens concerns Schumer and other public health advocates, who cite numerous studies finding that it breaks down in the presence of UV rays to form DNA-damaging free radicals, which can promote the development of certain types of cancer.

The article goes on to discuss the differences between UVA and UVB rays, and how the SPF ratings of sunscreen relate to protection against burning vs protection from skin cancer. Consumers should look for the words "broad-spectrum" to find sunscreen that protect against both UVA and UVB rays, but there are also certain ingredients that are safer than others.

The article also points to a site where you can look up the best sunscreens, as well as find out how your regular brand rates. I am Irish-white, with skin that does not tan so much as it burns. Since I am outside on a regular basis for both work and exercise, I am very good about slathering on SPF 30 or 50 before I head out.  I looked up the two brands I have been using lately, and they each fell in the middle of the scale. At a rating of 4, they were below the "recommended" range, but above the "avoid" category.

One of the concerns with my typical brands is that they both contain the chemical oxybenzone. Not only does oxybenzone break down in sunlight to form free radicals, but according to the site, it is also a synthetic estrogen that absorbs through the skin. No wonder I've been so emotional lately.
Posted by Sean at Tuesday, June 22, 2010