I haven't been following my hometown Mariners very closely, but I catch the box scores in the paper each day. I know enough that they aren't doing very well. I realized late last night that they were in town to play the the San Diego Padres, so I jumped online and grabbed a ticket to today's game.

To avoid hassles of traffic and parking, I took the trolley in from Lemon Grove. It runs about every 30 minutes on Sundays, and it drops you off within sight of the stadium. So great.

It was a beautiful afternoon, so I headed in early to walk around the stadium. Petco Park reminds me a bit of Safeco back in Seattle. Where I think Safeco has a bit more character, it is hard to beat the park-like atmosphere of Petco. There is a grassy hill beyond center field where you can lay out a blanket and picnic within sight of the field. There is even a mini baseball diamond where kids can play a T-ball game while waiting for the big-league version to start. Sundays are apparently both pet adoption days (Petco is the name on the stadium after all), as well as military appreciation day. Military personnel that arrive in uniform get half-price tickets, and I believe they sponsor a particular unit each Sunday. Just before the Padres took the field (in desert fatigue looking uniforms), there was a soldier standing at attention at each position. The players ran to their respective position and "relieved" the soldier. It was pretty cool. 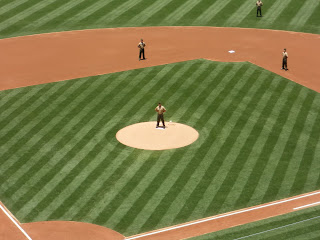 The tickets I bought were in the upper deck, but were right behind home plate. They turned out to be in the front row as well, so this was my view. 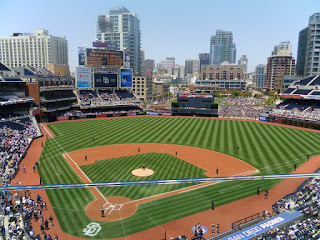 The Mariners have been playing pretty poorly, and their hitting has been almost non-existent. But today's game was a good one. Felix Hernandez pitched an almost complete game (being relieved with only one out to go in the ninth), and shut down the Padres for much of the game. There was a somewhat rare, two run, inside-the-park home run in the third inning when Franklin Gutierrez let a line drive hit get under his glove. But the Mariners responded in the next inning with an almost as rare (for them) two run home run by Milton Bradley. They went ahead in the eighth and added an insurance run in the ninth to win 4-2.

It was a wonderful, impromptu afternoon in the sun.
Posted by Sean at Sunday, June 13, 2010

Email ThisBlogThis!Share to TwitterShare to FacebookShare to Pinterest
Labels: move to San Diego