* While we were in Lake Powell, there was a family staying at the house, and they were there the afternoon after the marathon as well. One of the kids, who clearly had been paying attention to the adult chatter, asked me if I ran 13.1 or 26.2 miles. I was impressed by his informed question, and I told him I did the whole 26.2 miles. Then he asked that question that I have never been asked, but that I've heard repeated jokes about. He asked, "Did you win?"

* I don't know if my race strategy is changing, or if it was the week on a boat with kids, but I passed up the guy handing out beer on the course, but thankfully stopped for the kids handing out Otter Pops.

* Not many of the pictures I took came out very well, but I did capture one of the roof top deck where our Seattle group celebrated after running the 2007 marathon. We had a BBQ, ordered some pizza, and celebrated our long run in the sun. It was great. 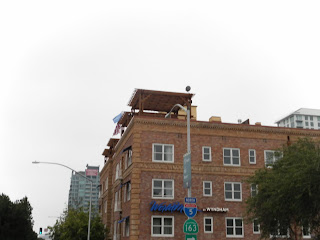 * So, on a scale of one to "damn that hurt", the marathon was five stars. It was the toughest one since the Surf City Marathon where I was fighting knee pain at mile 6. In both events, the second half of the marathon was much slower than the first half.

So I don't know if this is really insulting to the effort it took to finish the second half, or a commentary on the half-assed way I showed up, but this is the shirt I received at the end. 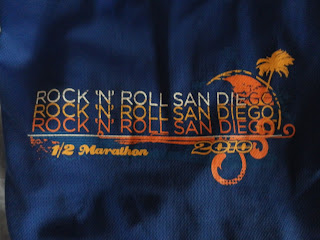 Since I missed the expo, I didn't get my shirt until the finish (so I wouldn't have to carry it I suppose). When I finished and found the information booth, they said they were out of the smaller sizes and only had large or extra large. (The fact that they were out of smaller sizes probably had something to do with the more-fit people finishing in front of me). I grabbed a large and stuffed it in my bag. I didn't look at it since I knew what it looked like from seeing so many on the course. Only after getting home did I realize I had a half, rather than full marathon shirt. Matt said "congratulations" with air quotes. Maybe I'll just duct tape over the "1/2"

* This was my fourth Rock n Roll Marathon event, and I have another half marathon version in two weeks in Seattle. The Rock n Roll fanchise puts on a good event - very well organized, good bands, lots of fun and energy. But Seattle may be my last time with them. The price for both the San Diego and Las Vegas events are now $50 higher for no other reason (as far as I can see) than they've become extremely popular. Competitor (the company behind all this) clearly thinks the market will bear this 60% increase in price for their reputation alone. Kind of a bummer, but there are plenty of other roads to run.

Which reminds me, its time to start training again. 128 days 'til next time.