Getting to another start line

The day started much too early, as it always does on race day, but it was a bit tougher than average this time around (mostly for self-inflicted reasons). In trying to fit in visits with as many friends as possible while I was in Washington, Tami and I went out to Diane's Friday night before the race. Diane was part of our great book club, and a few of us wanted to gather again to swap stories and catch up. And like most clubs, there was some wine involved.

We had a great time catching up, but even at three hours or so, it was much to short. But we had a race to run the next day, and a spaghetti dinner back at Tami's to carbo-load with. I ended up staying the night there so we could drive in together. We stayed up longer than we should have, and consumed a glass or two too much wine. But I was on vacation!

I was awake an hour early (2:30am!) and couldn't get back to sleep. This is not too unusual for race day, but this time it was the wine rather than pre-race jitters. The shuttle busses from Seattle to the start line were running from 4 to 6 in the morning, and I think we hopped on our school bus around 4:45. This put us at the start line with almost two hours to kill before the gun went off, but there have been enough horror stories of runners missing the start that we didn't want to take any chances.

Cherie and Wendy joined us about 20 minutes later, and we began the pre-race rituals of - checking in our stuff, stretching, visiting the porta-potties multiple times, and making any last minute adjustments before setting out. There is also lots of chatting with other runners, mostly explaining our team name and race day shirts. They are usually good for a laugh and a great converstation starter. 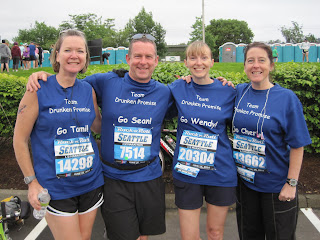 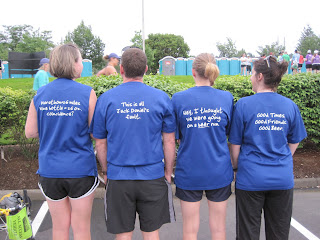 There was a VIP area sponsored by Brooks that included flush toilets, and more importantly, very short lines. You could get a "backstage pass" for VIP access by buying some Brooks shoes and apparel a couple of weeks before the race. 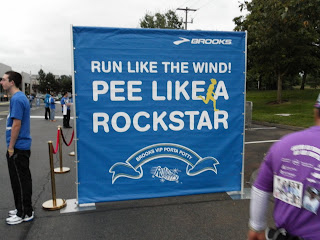 I was really tempted, especially since I run in Brooks shoes, but since I was running with several friends, it seemed wrong to be separated in my own gated community. But next time, I may need to do it. Even a couple of hours can seem too short a time when the bathroom lines are as long as they are.

There were approximately 27,000 runners toeing the line on Saturday, and 39 corrals in all. As I mentioned, I was planning on running with a pace group, and this put me in corral number 6. I was listening to John "The Penguin" Bingham speak at the expo, and he mentioned that people have much more fun the further back they are from the start line. I think there is some truth to that. In other races where I have been more mid-pack, the atmosphere is more like a party, with lots of smiles and excited chatter. Most everyone around me in corral 6 were all business. Very little chatter and determined looks rather than smiles.

The pacer (sponsored by Chuckit Racing) was named Tim and he welcomed each of us into his little group. There was nothing identifying us, so I'm not sure how many were in our pace group, but I would guess we started out with about fifteen runners. Each runner introduced themselves to Tim, who said he was pretty chatty, but would almost certainly not remember all our names.